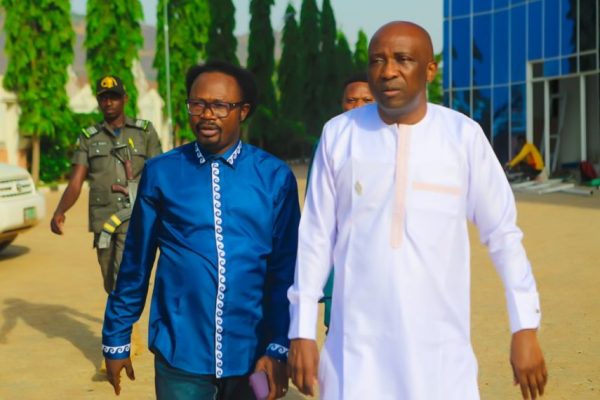 Primate Elijah Ayodele has paid a condolence visit to his friend in the ministry, Prophet Joshua Iginla, the General Overseer of Champions Royals Assembly, who lost his mother, Deaconess Moraimo Lasisi Iginla two weeks ago.

Primate Ayodele during the visit described the death of Dcns Moraimo Lasisi Iginla as a huge loss to the body of Christ as she was also a servant of God before she died. He defined her as a great woman of faith, a woman of valour, and a woman whom God singled out among others to be called Blessed.

He urged his friend, Prophet Iginla to continue with the legacy his mother left behind as he has always done while encouraging him not to mourn like those without hope because she is definitely resting in the Bosom of Christ.

Also, Primate Ayodele expressed his love for Prophet Iginla and his ministry, describing him as a friend and brother in the ministry.

He mentioned that they share a border of the same local government from their state in Ekiti.

‘’When I heard about the death of Mama, I was pained because it is a huge loss to the body of Christ. It’s obvious she laboured for the Kingdom of God before resting in the Lord’’

‘’I would describe her as a woman of faith, woman of substance, and a blessed woman among others. The bible made us to understand that ‘‘By their fruit, we shall know them’’ and I can tell that you, my brother (Prophet Joshua Iginla) as her son tells it all.’’

‘’I want to urge you to continue in the legacy she left behind as you have always done because that is the only way to keep her blessed memory alive.

‘’As painful as it is, the word of God has made us understand that as Christians, we shouldn’t mourn like those without hope concerning those who sleep in the Lord because certainly, they are resting in the bosom of the Lord’’

‘‘I am glad she was a staunch follower of Christ till she rested, May her gentle soul rest in Peace, Amen’’

In his response, Prophet Iginla appreciated Primate Ayodele for taking time out to visit him over the death of his mother, describing it as a meeting he will always live to be grateful for.

The two spiritual leaders spoke about insecurity that has befallen Nigeria for many months without any hope of light at the end of the tunnel.

Primate Ayodele has always said the solution to Nigeria’s insecurity problem is God only. Therefore, they both agreed to embark on powerful prayers for Nigeria solely against insecurity as soon as possible.

Also, after the meeting, Prophet Iginla took Primate Ayodele around his massive church building of 80,000 capacity, including the Pool Of Bethesda in his church.

He also mentioned that the 80,000 capacity building will be dedicated in May while asking for the presence of Primate Ayodele for the church dedication.