Governor Ifeanyi Okowa of Delta on Thursday has assured the Peoples Democratic Party presidential candidate, Atiku Abubakar of the state resolve to vote for him come February 16.
The governor gave the assurance while addressing the crowd at the Stephen Keshi Stadium, Asaba, the venue of the PDP presidential campaign rally.
He said that as a PDP-controlled state, the state government foresaw the party rising to take over the affairs at the centre.
According to Okowa, Atiku will be encouraged, come February, as the state will vote massively for all the PDP candidates, including those contesting in March elections.
He said: “We are prepared to vote and defend our votes during the elections, so we wish you well in your campaigns.
“In the past three and half years, we have been building bridges of peace and we have succeeded in uniting our people.
“We have consistently built infrastructure, created jobs and invested in education as well as the health industry to provide health insurance for our people.”
The Chairman, State PDP Campaign Council, Prof. Sam Oyobvire, lauded Atiku for his ingenuity, adding that voting for Atiku mean development and transformation of the country’s economy.
The News Agency of Nigeria reports that Asaba was agog as the city experienced heavy vehicular and human traffic, as party faithful headed toward the venue.
The Commissioner for Basic and Secondary Education, Chiedu Ebie, declared Thursday school free day for secondary and primary schools in the capital city.
Ebie said: “We have thought it wise to declare Thursday a school free day, to avoid any inconvenience to pupils in schools within Asaba.”
Abubakar, while addressing the people, pledged to resuscitate the three seaports in Delta, if elected.
He said: “I want to commend the good people of Delta for their loyalty to PDP over the years.
“I have come here today to seek your mandate in my quest to serve our great country Nigeria.
“Let me assure you that if you elect me as your president, I will do three major things for the people of this state.
“First and foremost, I will ensure the resuscitation of the three seaports in Delta that have been left dead over the years.
“Secondly, I will complete all abandoned Federal Government projects in the state.”
There was heavy presence of security personnel and other security agencies to keep peace in and outside the stadium during the rally.
Meanwhile, traders, especially those dealing in shoes, bags, food, recharge cards and other items, made brisk business during the rally. 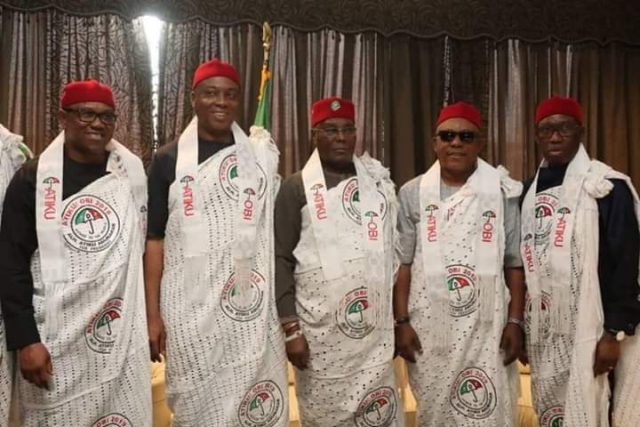 INEC to redesign polling units to comply with COVID-19 regulations

Africa, Eid-al-Fitr and the virus, by Reuben Abati

INEC to pilot use of electronic voting machines soon — Yakubu