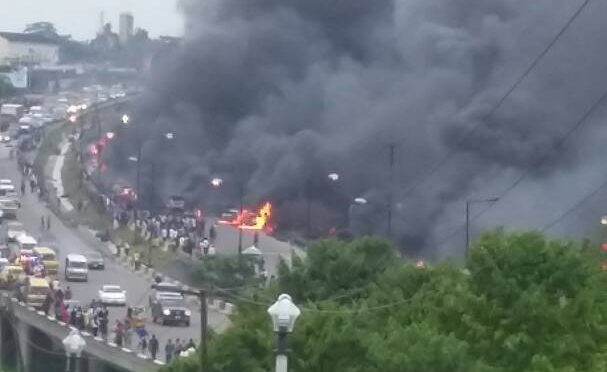 President Faure Gnassingbe Eyadema of Togo on Friday in Katsina condoled with President Muhammadu Buhari on the fire disaster caused by a fallen petrol tanker in Lagos on Thursday.
Eyadema, who is currently the Chairman of the ECOWAS Authority, said he was in Katsina to brief President Buhari on the latest situations in the sub-regional organization.
He, however, used the opportunity to commiserate with Nigeria over the Thursday’s Lagos tanker fire.
He said: “I came here in my capacity as Chairman of ECOWAS Authority to brief him on the different situations in our region – the situation in Guinea Bissau; the situation in Mali which is going to have presidential election at the end of July including my own situation in Togo.
“I used the opportunity to express my condolences to the President over what happened last night in Lagos state.”
At least nine persons were reported killed in the petrol tanker fire around Otedola Bridge on the Lagos-Ibadan Expressway on Thursday after it caught fire and spread the inferno to the vehicles behind.
President Buhari had on Thursday expressed shock and sorrow over the fire incident in Lagos where many people are feared killed with several vehicles burnt.
He said: “I’m very sad to learn of the tragic loss of lives, tens of vehicles, property and other valuables in the petrol tanker fire.’’
President Buhari expressed his deepest condolences to the government and people of Lagos over the tragic incident.