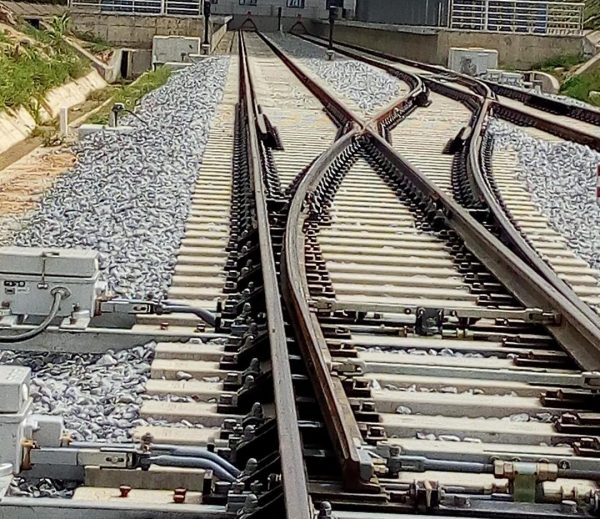 Share
Facebook Twitter LinkedIn Pinterest Email
President Muhammadu Buhari is expected to inaugurate the recently completed first Phase of the Abuja Light Rail Project on Thursday.
The FCT Minister, Malam Muhammad Bello, said on Monday that Buhari would also inaugurate the railway services, signalling the commencement of operations of the long-awaited rail services in the Federal Capital Territory, Abuja.
According to Bello, the Phase, which comprises Lots 1A and 3, is only an integral part of the six Lots that form the scope of the FCT railway system.
He said: “The event will take place in the Abuja Metro Station, in the Central Business District – the flagship of the 12 completed railway stations under this package.
“The 45.245km of standard gauge rail line running from the Nnamdi Azikiwe International Airport to the Abuja Metro Station is the first of its kind in West Africa.
“The project, which was completed by the present administration, has been under construction for over 11 years.
“It was inherited at 63 per cent completion; the remaining 37 per cent was fast-tracked to completion within the two years of the current administration by dint of resolute commitment to prudent management of resources.
“The inauguration would mark the formal commencement of rail service and the fulfillment of a long awaited dream for modern state-of-the-art mass transit systems for the FCT.”
Meanwhile, the Federal Capital Territory Administration has solicited the partnership of the Nigerian Railway Corporation to ensure a hitch free operation of the Abuja rail mass transit system.
The FCT Minister had at a meeting with officials of the Nigeria Railway Corporation in Abuja said the administration would require the support, supervision and guidance of the regulators for a smooth take-off.
Bello, who disclosed that some skeletal staff had already been employed to start some of the operations, explained that the expertise and experience of NRC would also be indispensable.
He said: “Based on your observations and your guidance, we will really appreciate support from you so that we can start a skeletal thing as we don’t want a situation whereby Mr. President inaugurates the project on the 12th of July and we just close shop.
“We intend to run it from the Airport to the Central Business District gradually for the people to know about it and for us to go through the learning curve.”
Responding, the General Manager of NRC, Fidet Okhiria, pledged the support of the corporation toward the successful running of the Abuja Light Rail Project.
This, Okhiria said, would include, capacity building, personnel and certification.
According to him, though the law permits states to run railways, the NRC is willing to support the efforts by giving the needed support and ensuring effective regulations of the industry.
Post Views: 0
abuja Abuja Light Rail Muhammad Bello Muhammadu Buhari
Share. Facebook Twitter Pinterest LinkedIn Tumblr Email

We were promised N1,000 each — Pro-Buhari protesters