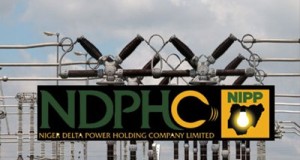 Share
Facebook Twitter LinkedIn Pinterest Email
All things being equal, by December this year, incessant power outage in Asaba, the capital city of Delta state and its environs will give way.
The Niger Delta Power Holding Company (NDPHC/NIPP) has commenced the commissioning of the Asaba/Ibusa 330/132/33kv Substation project.
The Site Manager of the contracting firm handling the project, Mr. Odinaka Amaobi, of the Ak-Ay Eletrick, expressed the hope when the Eagle online visited the project site along Asaba/Ibusa expressway at the weekend, saying the project would be delivered as a Christmas gift to the people.
Amaobi, flanked by two other Senior Engineers, Mr. Godfery Duru, Project Manager (Niger Delta Power Holding Company (NDPHC/NIPP) – Transmission Team III and Mr. Benson Bayo, representing, GOPA-Intech a Consultant to NDPHC said the inspectors commenced the commissioning of the project since last week.
He said, “As we speak, the major work on the substation is done within a space of two years when the project started after the contract was awarded by the Federal Government. This shows that the transformation agenda of the President Goodluck Jonathan led administration is working. And I am sure that this project will be delivered to the residence of Asaba and environs as a Christmas gift this year.”
Corroborating him, Duru said there was no doubt that the Substation would be a game-changer of the economy of the people of Asaba and environ considering the current situation where the zone would have to depend on supplies from Obosi.
“The Transmission Company of Nigeria (TCN) in charge of drawing the lines from Onitsha and Destron Engineering Limited, contracting firm in charge of tuning in and turning out light from substation are not resting either. They are busy working day and night and we hope they will deliver by middle of October to enable us energise the power transformer in the substation.When this is done and the facilities to power the 33kv is put in place, then the people will celebrate”, Duru said.
While he lauded the contractor for doing a good job on the power substation, adding that delivering light to the people in December certain because the areas of challenges which has to do with transmission lines were being addressed, Bayo said “We have carried out a general test of the project and we have found that it conformed with the set standard and one thing that makes it outstanding is that it has provision for future and all its operations are automated,” Bayo said.
Niger Delta Power Holding Company (NDPHC/NIPP) Transmission Company of Nigeria (TCN)
Share. Facebook Twitter Pinterest LinkedIn Tumblr Telegram Email