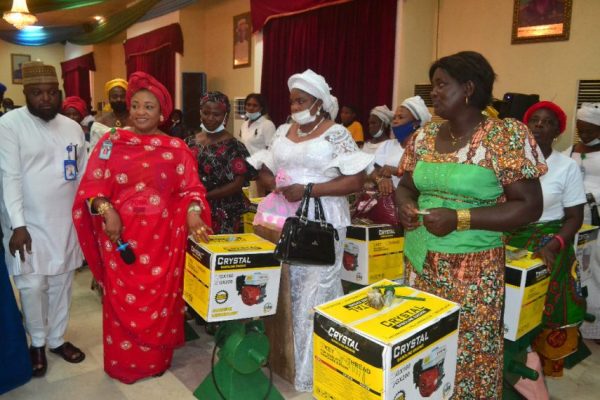 Hajia Hajara Usman Alkali Baba, the Police Officers Wives Association (POWA) national president/wife the Inspector General of Police paid a three-day visit  to Delta state command. The POWA president arrived Delta state on 9th September 2021 with a clear three point agenda which are welfare, health and Education. After a courtesy call to the Commissioner of Police, Ari Muhammed Ali, she proceeded to Police Children Primary School Asaba where she commissioned the renovated classroom and E-library built by Rotary Club of Nigeria.

She paid a courtesy visit to HRM the Asagba of Asaba, Professor Joseph Chike Edozien. Thereafter, she commissioned a borehole water project at ‘B’ Division barracks Asaba.

As part of her health agenda, she mobilized police officers wives in the state and embarked on  road walk around the Asaba metropolis. She later flagged off sanitation exercise at ‘A’ and ‘B’ Division barracks respectively. She paid a courtesy visit to the Governor of Delta State,  Dr. Ifeanyi Okowa at Government House Asaba before proceeding to the Unity Hall Government House Asaba.

She announced that very soon, there will be a quiz competition for all police children and the winner of the quiz will be given a cash price of #10,000,000(ten million naira). During the meeting  with POWA members, she empowered some widows of late police officers who died in active service and also empowered about 150 wives of serving police officers. After the empowerment, the POWA President in conjunction with  police medical doctor, Dr Nonye had an extensive health talk with POWA members.