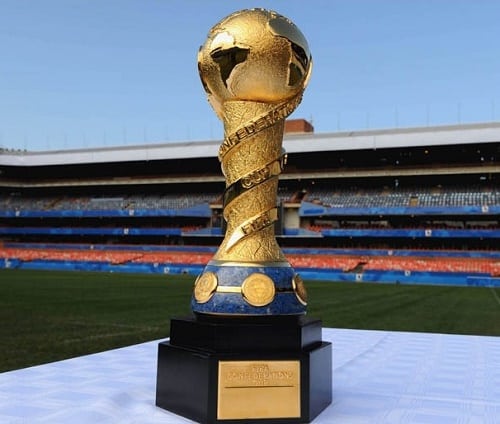 Title contenders Portugal and Mexico fought out an entertaining 2-2 draw in the Confederations Cup on Sunday, with each team scoring in the last five minutes.
Portugal looked set for a late win when Cedric Soares scored with a deflected shot in the 86th minute, but Hector Moreno equalized for Mexico with a header in stoppage time.
Cristiano Ronaldo, coming off a tumultuous week off the field, had set up Ricardo Quaresma’s opening goal for Portugal, and Javier “Chicharito” Hernandez hit Mexico’s equalizer just before halftime.
The result left European champion Portugal and Gold Cup winner Mexico trailing host Russia in Group A. Russia opened the tournament with a 2-0 win over New Zealand on Saturday.
Soares’ goal had to be confirmed by video review but it eventually stood. Portugal had a first-half goal by Nani disallowed after a video review, when the game was still scoreless.
Mexico controlled possession and spent more time in Portugal’s area, but the Euro 2016 champions were a constant threat on the counterattack in front of 34,372 fans at the Kazan Arena.
Portugal coach Fernando Santos said it was not the performance he expected from his team.
“We know we didn’t play well,” he said. “Mexico was better, more aggressive. We played without confidence, couldn’t connect two or three passes. It was a fair result for how the teams played.”
Ronaldo made a great run from near midfield to set up Quaresma’s 34th-minute goal.
Ronaldo carried the ball into the area but was surrounded by three defenders and he passed it to Quaresma, who was free from markers on the far side of the box. The veteran forward used one touch to clear goalkeeper Guillermo Ochoa and then easily found the open net.
Mexico equalized less than 10 minutes later with a close-range diving header by Chicharito after Portugal defender Raphael Guerreiro failed to clear a ball crossed into the area. Mexico midfielder Carlos Vela got to the ball near the far post and sent it to the middle of the area for Chicharito’s goal.
Soares scored late with a right-foot shot from inside the area after Mexico midfielder Hector Herrera gave the ball away, and Moreno’s equalizer came with a firm header from close range after a corner kick.
Ochoa made a great diving save in the 85th to keep young Portugal forward Andre Silva from scoring with a header.