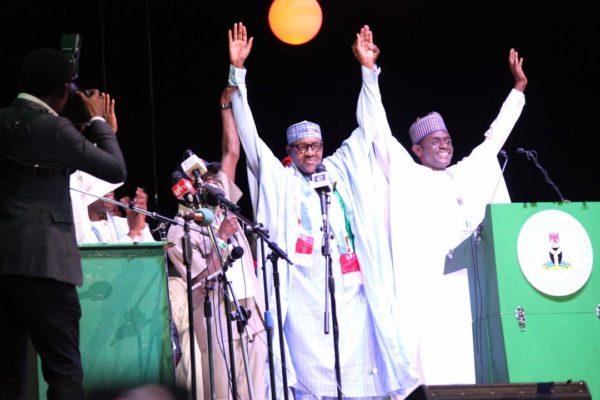 A Non-Governmental Organisation, the Borno Hausa-Fulani Community Development Association, has called on residents of the state to vote for President Muhammadu Buhari, in the February 16 presidential poll.
The Secretary of the association, Alhaji Aminu Gwandu, made the call at a news conference on Sunday in Maiduguri.
Gwandu said the call became imperative to enable Buhari consolidate on the successes recorded in the campaign against Boko Haram insurgency and other challenges facing the country.
He said: “In the context of contemporary happenings in the country; we have made our position unambiguously to support the re-election of Buhari.
“Our decision to support Buhari is predicated on the natural premise of his unequalled qualities of patriotism, nationalism, discipline, statesmanship, probity, chastity, democratic humanism and social justice.
“People of Borno appreciate the commitments of Buhari’s administration to bring peace and security, rehabilitation of Internally Displaced Persons and address the humanitarian crisis caused by Boko Haram insurgency.”
Gwandu called on the electorate to collect their Permanent Voters Card to enable them exercise their franchise, and vote for the All Progressives Congress candidates to enable the party win election at all levels.
He also called on politicians to play by the rules, shun character assassination and sensitise their supporters on the need to observe orderliness and peaceful conduct during the election.
According to him, the association is the umbrella body of over 100 Community Based Organisations aimed at the promotion of responsible citizenship, encourage growth of democratic culture as well as social and economic development of the state.