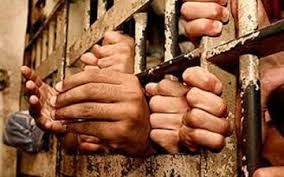 A policeman and five other persons were on Thursday ordered remanded in Kirikiri Prison in Lagos State for allegedly robbing some Chinese businessmen of N6 million worth of goods and cash.
The policeman and the others were ordered remanded in prison by an Ikeja Magistrates’ Court.
The Magistrate, O. A. Akokhia, did not take the plea of the accused.
Akokhia adjourned the case till December 22 for mention.
The accused are Sunday Onuh (32), driver; Peter Owoicho (30), house keeper; James Momoh (20), driver; Emmanuel Audu (32), unemployed; Francis Onuh (32); and Gabriel Ochigbo (32), a police officer.
The accused reside in Oworonshoki, Ogudu and Ikorodu areas of Lagos State.
They are charged for conspiracy, robbery and stealing.
The prosecutor, Inspector Benedict Aigbokhan, told the court that the offences were committed on April 12 at Howson Wright Estate, Ojota and Medina Estate, Gbagada, both in Lagos State.
Aigbokhan said the accused robbed a Chinese woman, Vicky CAO, of four laptops valued at N600,000, mobile phones valued at N450,000 and cash.
He said: “Other items stolen from Vicky CAO were iPad and wrist watches, all valued at N5,145,000.
The accused also stole Angela Chinonso-Jeremiah’s mobile phone valued at N30,000.
Aigbokhan added: “They robbed Mr. Vega Wang of I-pads, laptops and cash of N300,000, all valued at N660,000. The accused robbed one Mr. Yunchun Lee of mobile phone and cash of N150,000, total valued at N270,000.
“The total value of all the items stolen are N6,105,000.”
Aigbokhan also said that the accused were caught with various arms like guns of all kinds and daggers.
The offences contravened sections 285, 295 and 409 of the Criminal Law of Lagos State, 2011.