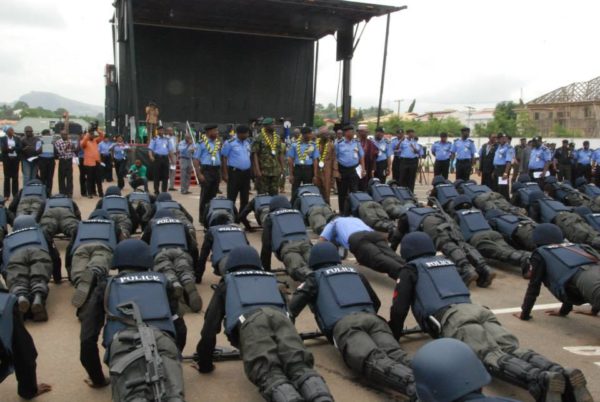 The Nasarawa State Police Command on Thursday said it foiled a bank robbery attempt by a four-man gang, following a gun battle with the suspects in Lafia.
SP Kennedy Idirisu, Spokesman for the command, confirmed the incident to the News Agency of Nigeria in Lafia.
He said that policemen on duty at a branch of Diamond bank on Jos Road, Lafia, got a tip-off about the robbery on Wednesday, and engaged the gang in a gun battle at 10a.m. in front of the bank.
Idirisu said that the gang drove in in two vehicles, both with Lagos registration number – a Toyota Lexus  marked EKY 282 DP and Toyota Corolla marked FST 411 FH.
He said that the police arrested one of the suspects, and two died while receiving treatment at the Dalhatu Araf Hopital, Lafia.
According to the spokesman, a suspect escaped with bullet wounds.
He said: “Our investigation revealed that the gang trailed a staff of the General Hospital Nasarawa Eggon, from the bank in Lafia, where he withdrew N250, 000.
“They followed him to Nasarawa Eggon, took the money, and returned to Jos Road, where there are clusters of banks, to carry out another operation, not knowing that they were being trailed.
“The police swooped on them and arrested one of the suspects driving the Toyota Corolla, while the others in Toyota Lexus  opened fire in an attempt to escape.
“The jeep and two of the suspects were arrested on Shendam Road while the driver escaped with bullet wounds.”
He said that the arrested suspect confessed to the crime, adding that items recovered from the vehicles included the stolen N250, 000, a master key and a wallet containing N31, 000.
Similarly, Idirisu said that the police arrested  three other robbery suspects  on the same day at Nasarawa LGA for allegedly robbing a couple at Gunki Village.
He said that the robbery took place on Tuesday.
According to him, the police recovered two locally-fabricated pistols, two live cartridges and valuables of the victims from the suspects.