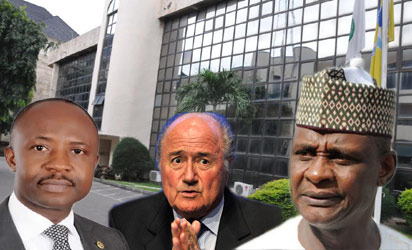 Despite the warning by the World Football governing body, FIFA, Nigeria Football Federation (NFF) secretariat was like a war zone on Monday as an unspecified number of police wielding guns flooded the Glass House with pockets of the personnel from the Department of Security Services (DSS) in anticipation of any breakdown of law and order.

The police who had stormed the federation in the early hours of Monday morning with two patrol vehicles stationed across the road at the entrance of the gate housing both the federation and the Federal Road Safety Corps, subjected both the visitors and the staff of the federation to vigorous search before allowing them entrance to the Glass House.

One of the staff of the football federation attributed the return of the security agents to the threat from the Ambassador Chris Giwa-led faction to storm the federation on Monday, adding that it was not also unconnected with the plan to stop him  from serving the court bailiff.

“It is not true that the federation is now a war zone again. We don’t have to take chances especially as members of the Giwa-led board threatened that they are going to storm the Glass House today (Monday) to take over the running of the federation.

“Recall also that there was a purported court bailiff from Jos to stop the Warri congress but until now that I am speaking with you, the federation has not gotten the bailiff. As you can see the security agents going through the documents of the visitors. Perhaps, they are ostensibly searching for the court bailiff.

“You are an eye witness when one of the senior police officers told his men to station at the entrance door of the federation, instructing them to ensure that only the visitors the internal private security guards cleared should be allowed entrance,” our source noted.

Asked if the failure of the General Secretary, Barrister Musa Amadu, to report to the office on Monday has any connection with the arrangement to stop the court from serving the injunction, our source said that it might not be far from it, adding: “All I can tell you is that Amadu is not in office today but there are other senior staff like the directors in office.”