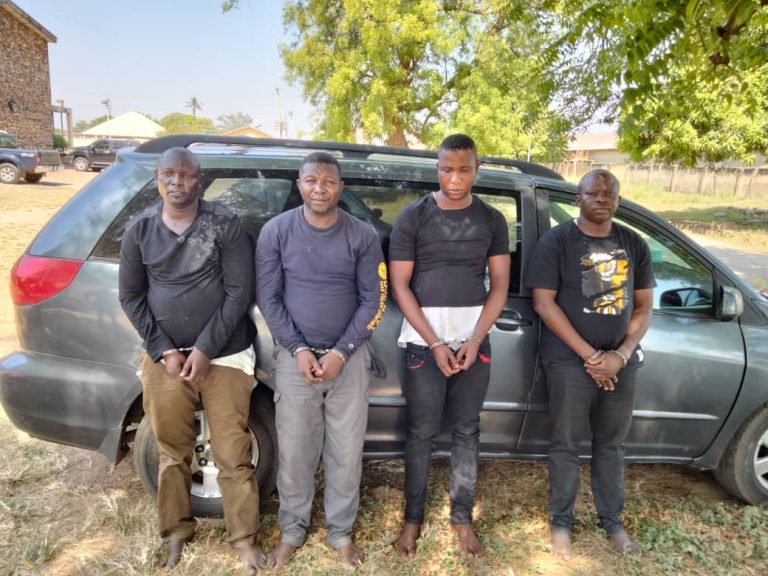 The Niger State Police Command has confirmed the arrest of four persons in connection with the armed invasion of the residence of the representative of Niger East Senatorial District, Senator Sani Musa, on Saturday night.

This was confirmed by the spokesman of the Command, DSP Wasiu Abiodun, on Sunday in a statement he issued.

Abiodun said the suspects claimed to have been recruited by one Sherif, a purported whistleblower working for a security Agency in Abuja, to carry out a search on the senator’s house.

He gave the names of the suspects as Oladele Peter Akano, 49, of Kuruduma, Abuja; Abdul Salisu, 31, of Gwagwalada, Abuja; Felix Clarkson, 47, of Karo, Abuja; and Babagana Alhaji, 39, of Chideri-Polo, Maiduguri, Borno state.

He said the suspects invaded the residence of Musa, located at Tunga area of Minna in a Toyota Sienna vehicle with Registration Number: FKJ 814 GP.

Abiodun added: “During interrogation, the suspects claimed that they were mobilised by one Sherrif, a purported whistleblower who was reportedly claiming to be working with a security agency at Abuja but presently at large.

“The said Sherrif  invited Akano, who is a teacher in a private school at Abuja. He also invited Clarkson, an instructor in a private institute ‘INSMO’ Abuja, Salisu who is a plumber from Gwagwalada, provided hammer and chisel for house breaking and Babagana Alhaji, with five others presently at large.”

Abiodun said the suspects told the police Sherrif told them that there are foreign currencies and arms kept in the residence of Musa.

He said: “They travelled from Abuja to Minna for a purported execution of search without any warrant.”

He pointed out that the security operatives attached to the senator’s house suspected the fake team and raised alarm for reinforcement.

This prompted the drafting of police operatives attached to Tudun-Wada Division and Anti-kidnapping team of the Command to the scene.