Police arrest varsity students who stole money, phone of colleague as he drowned in pool

The police in the Federal Capital Territory has arrested two students of the University of Abuja who watched as their colleague with whom they had gone to swim died.
According to available information, the arrested students, who went to the Dome Hotel in Abuja to swim with their drowned colleague, Emmanuel Balogun, abandoned him as he gasped for breath, but rather went after his money and phone.
They then returned to their hostel.
The arrest of the students was confirmed by the spokesman of the FCT Police Command, Danjuma Gejere, to The PUNCH.
Gejere said the arrest followed the unveiling of the story to the public by a source who claimed to be close to the family of the deceased.
He said the students were arrested in their hostel.
Below is the account of the story, unedited, by the family friend:
TRUE LIFE STORY. IM CURRENTLY ON IT
We live in a very trying and perilous times. A very dear friends undergraduate’s 17yr old son got drowned at the Dome hotel pool in abuja last weekend. He was in the company of his friends.  The friends didn’t report to the hotel mgt what happened nor to the deceased’s (Emmanuel Balogun) parents. They went back to the school (Uni Abuja) hostel immediately after the incident. On Monday a young girl from uni abuja called the mother of the deceased that they did not see Emmanuel her son in class. She went further to tell the parents it’s like something has happened to Emma and ended the call. The mother called back the line but it was switched off. She notified her husband & they immediately placed a call to their sons number and it was off. They drove that Monday night to their sons hostel but met his absence. They now got information that a party was thrown for fresh year students over the weekend at the Dome hotel in town. They set forth for the hotel. The hotel mgt told them there was a case of drowning in their hotel over the when’d & directed them to the police. The police now led them to the mortuary, lo & behold it was their son. Yesterday morning, myself & the deceased uncle went to the police to see the CCTV footage of what transpired @ the hotel. What I saw and later heard yesterday was unbelievable. From the CCTV, we noticed the deceased entered the pool with 3 of his friends and around 3.33am he started struggling in the pool. His friends where all watching him until he stopped struggling and drowned. They all left the pool immediately and one took his handset the other took his trouser and brought out the money inside the pocket and wore his shoes. They left the hotel around 4.18am according to the footage we saw. The police went to the school & effected the arrest of the trio and mgt of the hotel. At the DIG’s office yesterday afternoon, I heard something that has being giving me cold shivers all through yesterday and right now. One of the boys said that he wanted to raise an alarm to save the boy but the other two boys asked him not to. That the deceased is always doing shakara because his father his rich, he went further to say that the other one said all the girls are always admiring the deceased so he should let him be joor. This are just mere 17/18yr old boys 🙆🏻‍♂. Watching the CCTV footage where the friends were watching him drown and collectively decided,cos there was a time they grouped together to discuss for about a minute & from the confession of one of them is not only traumatic for me but also disheartening. They watched their “Friend” die out of jealousy & envy 😭. According to them, it was the deceased that paid 2k each gate fee for them and also bought fish and juice which they all drank. This are mere teenagers with that kind of heart. My people, be extra careful for people you call your friends. According to the DIG, A lot of people are being murdered daily cos of envy from friends. No doubt, There are good and wonderful friends but also, know ye, there are also friend-enemy everywhere. So be extra careful and prayerful cos the love of many has really waxed cold. 😭😭. The young man was buried today amid tears 😭 according to the wishes of his parents but his wicked friends & hotel mgt  are still in police custody at the force headquarters as we speak. May none of us bury any of our children or young ones in Jesus name. Amen. Beware of jealous & Envious friends they are more lethal and toxic than acid. 😡😡😡😡😡😡😡😡😡😡😡😡. Below 👇👇is the picture of the young man whose death would have being avoided. 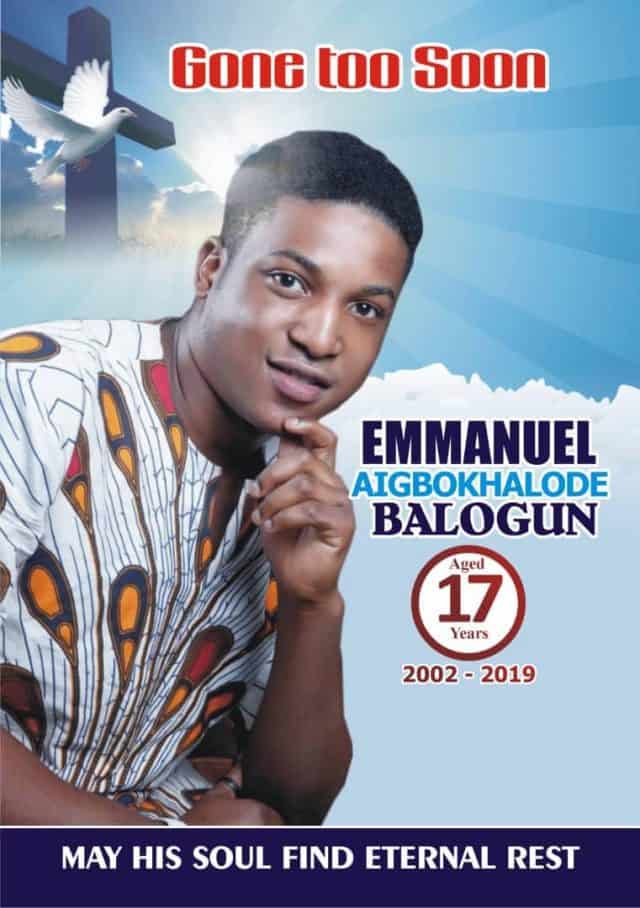 Serie A gets resumption date

Why we took over NIDCOM office — NCC