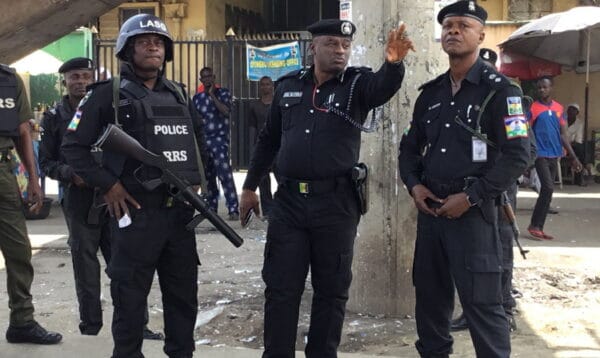 The Police Command in Nasarawa State have arrested four suspects in connection with the kidnap of Alhaji Umaru Jibrin the village head of Hunki in Awe Local Government Area of the state.
Bola Longe, the state’s Commissioner of Police, stated this on Tuesday in Lafia while briefing newsmen.
According to him the suspects- Musa Adamu (26), Umaru Mohammed (28), Nuhu Muhammed (38) and Hassan Zakari (20), were arrested following a tip off.
Narrating his ordeal in the hand of the kidnappers, the village head said that he spend two days without food in their custody.
He said that he was kidnapped at his residence around 3:a.m., on July 23 by a group of five persons who took him to an unknown place and released him after receiving N600, 000 as ransom.
He, however, said on the day he regained freedom, he went to eat in Awe town when he recognised one of the suspected kidnappers and raised an alarm leading to his arrest and he was handed over to the police.
In an interview, Umaru Mohammed, one of the suspects confessed to the crime, saying he was lured by his friend.
Longe said policemen on a stop and search operation along Toto-Abaji road on July 21, 2019 discovered 312 rounds of 7.62 live ammunition in a bag containing laptop and an iPad in a Golf salon car.
He explained that in the process some occupants of the vehicle escaped while two others- Abdulraham Idris and Zakari Abdullahi were arrested.
Longe further said that the police also arrested one Saidu Abdullahi, a robbery suspect at Mahanga village of Awe LGA with two AK 47 riffles.
He said that the police also arrested another robbery suspect Mohammed Angulu (40) at Umaisha in Toto LGA with one single barrel gun, 29 rounds of live ammunition.
The Commissioner therefore called on members of the public to continue to support the police as they are more determined than ever before to combat crime and make the state violence free.