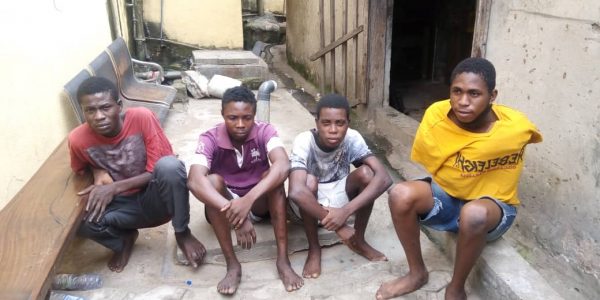 Police in Lagos have arrested four suspected armed robbers at Mayfair Garden, Awoyaya in Ibeju Lekki area of the state.

The spokesman of the Command, Bala Elkana, revealed this in a statement on Sunday.

He said they were arrested by the operatives of the Special Anti-Robbery Squad attached to the Lagos State Police Command.

A locally-made pistol and one of the phones that were stolen at the scene of the robbery were recovered from the suspects.

The policemen also recovered four unexpended cartridges from the suspected armed robbers, who have reportedly been terrorising residents of Ibeju Lekki.

The Lagos State Commissioner of Police, Hakeem Odumosu, who confirmed the arrest of  the suspects, said the police would thoroughly investigate all their criminal activities.

The suspects however claimed that though the police recovered a pistol from them, it was not used for robbery, but for land thuggery, whenever they were involved in clashes with their opponents.

Odetola, the leader of the gang, confessed that the police actually recovered the gun and the cartridges from them.

He however claimed that they were using it as land thugs.

Odetola said: “We are not armed robbers.

“It is true that the gun was found with us.

“We are land grabbers’ thugs.

“We use the gun to protect ourselves against our opponents.

“When we were fighting the Hausa people, some of us also sustained injuries.

“Sincerely, what caused the clash is what I don’t know.

“I only saw three of them beating one of us and we cannot fold our arms and allow them to beat him.

“That was why we supported him in fighting the Hausa people.

“After we had been separated by some elders in the community, one of the Hausa boys started shouting that we took his phone.

“They ran back to us where we were standing that we cannot leave.

“They collected our phones and money from us.

“Unfortunately, after searching us, the Techno phone was recovered from one of us.

“That was how they started beating us again that we were armed robbers and we were later taken to Elemoro Police Station at Ajah.

“While at the station, we were searched.

“A locally made gun was found on us.”

According to Adeboye: “I was at home relaxing when my friends ran to me around 8pm from the site that they were chased out and they decided to come to my house to hide before going to their respective places.

“After staying with me for about two hours in my house at Gbetu in Ibeju Lekki area of the State, they were returning to their respective homes around 10pm.

“It was when we were going that fight broke out between one of us with the Hausas, who also reside in the area.

“I was only escorting them to get bike that would take them to the bus stop, where they would board a bus because it was late.

“What caused the fight, I still don’t know up till now.

“It was in the process of stopping the fight, one of the Hausa boys stabbed me and Rasheed.

“Immediately I was stabbed, I left the scene.

“I don’t know anything about the fight.

“If I had known that that’s what is going to happen to me, I won’t allow them to come to my house.

“I only pitied them when they said they ran for safety of their lives.”

Another suspect, Zion, also confessed that the stolen phone was found on him, but claimed to have picked it on the floor during the clash between them and the commercial motorcyclists.

The 23-year-old suspect said: I am a commercial motorcyclist.

“That was the first time that I went with them to site.

“It was Rasheed that invited us that some people were coming to fight with us.

“When we were fighting, I saw a phone on the floor and I picked it and hid it in my pocket before we were eventually arrested by the police.

“We are not armed robbers.”

Odumosu warned criminals in all parts of the state to be ready to face the full wrath of the law or turn a new leaf.

The police boss also the suspects would be properly investigated and prosecuted to serve as deterrent to others who hide under different names to foment trouble in the state.