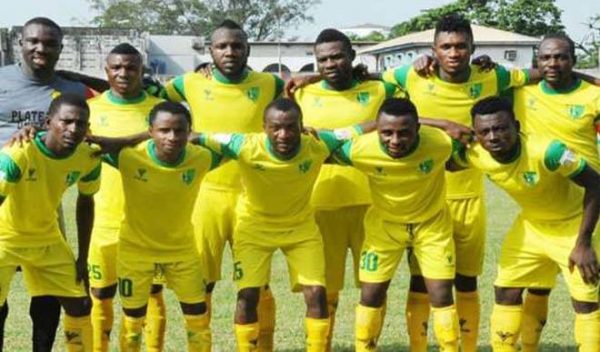 Plateau United has dedicated its CAF Champions League ticket to the massive support of its fans and the club owner, Plateau State Government.

The Media Officer of the club, Albert Dakup, in a statement on Tuesday quoted the club’s General Manager, Pius Henwan, as saying the team enjoyed unprecedented support and encouragement, which was the driving force that propelled them to pick the continental ticket.

Henwan said: “The continent ticket which is heartwarming is a manifestation of the hard work, commitment and dedication put in by the entire team in the outgone season halted by the COVID-19 pandemic currently ravaging the world.

“We herewith thank the Head of the Rescue Team in Plateau, Governor Simon Lalong for his untiring support, motivation and encouragement to the team.”

The general manager further commended the technical crew headed by the soft-spoken Abdu Maikaba, for rejuvenating and reviving the fortunes of the club as one of the bests in the country.

He also saluted the players for their hard work, dedication, commitment, diligence and cooperation which helped them emerge “true champions” of the 2019/2020 NPFL season.

He said: “The club also thank our teeming fans and the people of Plateau  who usually troop out in their numbers to cheer the team to victory and assured that the team will continue to strive hard and put smiles on their faces.

“The management in a special way appreciates the efforts of all the major stakeholders of football in Plateau.

“We recognise their unwavering support and solicit for more as the team prepares to represent Nigeria in the CAF Champions League next year.

“With the September/October kick off date for the 2020/2021 season fast approaching, the management of the club assures that efforts are on to recruit tested and quality players to beef up the team.

“We also urge those who will be seeking greener pastures elsewhere to pray for the success of the the team.”

The League Management Company, organisers of the NPFL, declared the 2019/2020 league season conclusive, with Plateau United top of the log with 43 points from 25 matches as champions.