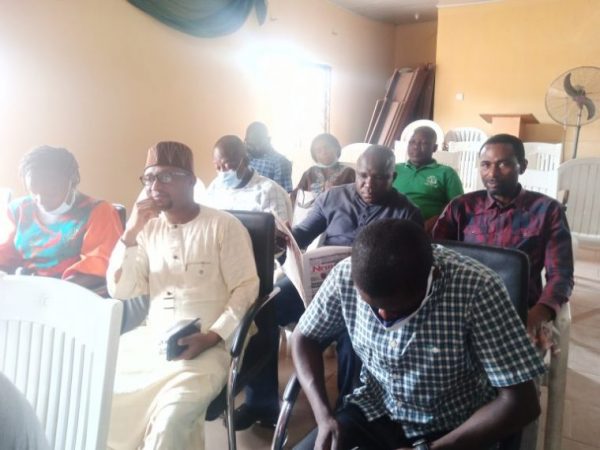 The Plateau State Council of the Nigeria Union of Journalists on Friday facilitated the administration of the COVID-19 AstraZeneca Oxford vaccine for its members in Jos.

Speaking after getting the jab, Council Chairman, Paul Jatau, said the gesture was necessary to protect members from the virus.

He said it was necessary for journalists to get the jab since they interacted with different people daily as frontline workers.

Jatau assured journalists that adequate arrangements had been made for the availability of the second jab, and urged more journalists to take advantage of the gesture noting that Friday’s turnout was poor.

A correspondent of Plateau State Radio Television Corporation, Jembyen Zitta, said she was initially nervousness before taking the jab because of myths surrounding the vaccine.

Zitta said: “I had several opportunities to take the jab earlier, but was discouraged because of the many conspiracy theories on the use of the vaccine for depopulation and alleged trigger of memory loss.

“I do not have any reactions for now and I feel the vaccination will go a long way to help as a preventive measure.

“I advice everybody to get the vaccine because I foresee danger if you do not get it.

“The disease affects us economically, psychologically and health wise.

“With time you may need to present your card (COVID-19 vaccination card) before you do certain things in the country.

“So it’s not just for our health but for the betterment of the country.

“I will not want anybody to get embarrassed because they do not have the card.”

Zitta said people, especially those in the rural areas, who are financially burdened, should avail themselves of the exercise while it is free, as it may be paid for in the future.

The State Correspondent of New Telegraph Newspaper, Pam Musa, said he took the jab because of the encouragement he got from his friends who practice medicine, who assured him of its safety.

Musa said: “I encourage those who have not taken, to do so when they have such opportunity.

“I also appeal to government to make the vaccine available in rural areas and to vulnerable people.”

A reporter with the Nigeria Television Authority, Ekeremen Ladoja, said she did her personal research before taking the jab.

She urged others to do their researches on the vaccine, instead of believing myths and conspiracy theories in the grapevine.

A reporter with Highland FM, Murtala Sani, said he took the jab for his health and wellbeing and to facilitate future international travels, adding that experts has assured of its safety

Sani said he was sceptical of taking the jab because he has a medical condition, but was assured of its safety after consulting with medical personnel.

The leader of the health team outreach, Berjala Mafwalal, assured journalists of the safety of the vaccine, saying the exercise had been ongoing for more than two weeks with no report of complications.

The News Agency of Nigeria reports that the second jab of the vaccine would be administered after three months.