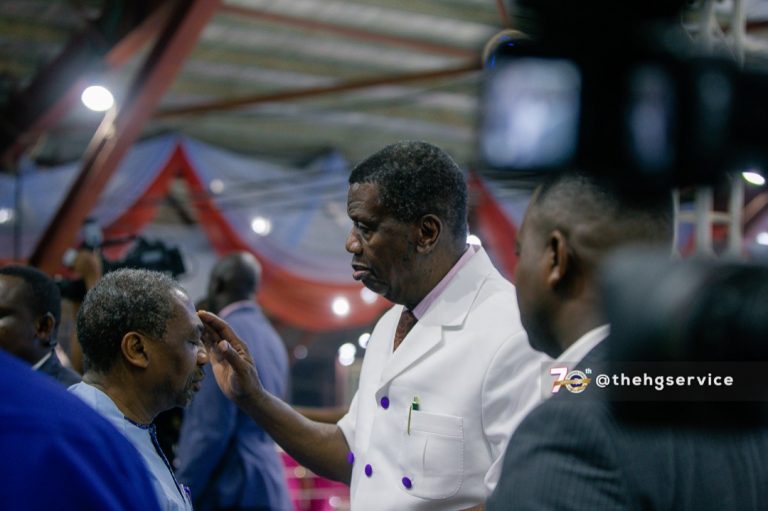 It was the second day of the Special Holy Ghost Service of the Redeemed Christian Church of God. It was also the day after the 80th birthday of the General Overseer, Pastor Enoch Adejare Adeboye. So, it was an opportunity for thousands of faithful to receive their spiritual birthday gifts.

The Holy Ghost Service itself was a birthday gift to him from God, who promised miracles for his followers, for which the service was birthed years ago.

So, somehow, people were right to call the March 3 service his birthday service and expect blessings.

They were there in their thousands from all strata of society at viewing centres in at least 195 countries and spectacularly at the two auditoriums at the Redemption Camp on the Lagos-Ibadan Expressway.

In the larger of the two halls, where the service was held, Vice President Yemi Osinbajo and his wife, Dolapo, were sighted. So were many governors, eminent clerics and first-class traditional rulers.

The massive congregation was not disappointed, but they were required to trade in faith and obedience for the special moments, as God expects of Pastor Adeboye. Some years ago, an unusual demand was made of him to perform a miracle. He had to obey God from who he has the gift of hearing.

In one of his testimonies, he recalled that God told him to wear seven different garments, dance for five minutes, lay the garments on the altar and ask people to touch them for miracles.

He said: “Although nowhere is it written in the Bible that thou shall wear seven garments and shall dance for five minutes and then lay them on the altar, I heard Him speak to me. So I did what He asked me to do. He also gave me specific instructions to tell the people to only touch and not hold the clothes.

“A certain young man among the crowd went contrary to the instruction and held the garments. He must have thought: ‘My problems are many, touching will not suffice.’

“What happened after was that the power of God grabbed him. He began to shake from that point in the morning till 5pm and it wasn’t until I was called to pray for him that God released him.

“There is what is called the office of the prophet. When God says something through his prophet and you believe, it will be with you.”

That Friday night also, he took time in the early part of his sermon to prepare his audience for the special moments.

He revealed that while preparing for the service in his prayer room, he asked God for the instant healing of 8,000 and God assured him that when he calls out those who had been healed, they would “come out like a river”.

There are no dramatic reactions to miracles in the church, but they do happen, and he said so. “Get ready for your healing. There will be no shaking, no jumping up and down, and it’s already happening.”

He also said that in March, 8,000 barren women would conceive and by December, the number of barren women who would be pregnant due to the sermon would be 80,000. The response to that was thunderous.

Pastor Adeboye, however, warned that in the process of the miracles, God would ask the congregation, including the old and the dignitaries, to do childish things.

Childish things
Deep into the sermon, he repeated the warning and asked everybody to stand up. In the first of the special moments, he said to them: “With all your strength, I want you to shout – Lazarus come forth!”

There was a deafening shout for Lazarus, a friend of Jesus who rose from the dead after four days.

According to the Pastor noted for miracles, signs and wonders, God asked him to tell the congregation that because “you shouted, every opportunity you have lost in life will begin to return back to you – Amen.”

The second exercise, which came later in the sermon, was vigorous, especially for the old and dignitaries who were seated on the altar. It is believed that nobody can sit there and be disobedient to God.

Again Pastor Adeboye explained the need for the miracle: “Daddy (God)  says in Exodus Chapter 4, when I asked Moses to throw down his rod and it became a serpent. When he bent down to pick the serpent to turn back to a rod, his hand touched the floor and by the time he got up, it was not the same Moses who bent down who got up!

“Would you be childish enough to bend down and touch the floor and say: ‘Lord, my hand has come in contact with Your Holy Ground. From now on, whatever I touch, let it prosper – Amen. Then stand up and shout a big Hallelujah to the Mighty God.”

There was total obedience by the congregation to the directive.

A third directive came soon after. God wanted the congregation to laugh. For the roar of laughter came the divine promise that  for those who laughed, everyday of sorrow in their lives would be replaced with a month of laughter.

Perhaps, the biggest moment to the congregation was when, in what has become a tradition at special services, Pastor Adeboye blessed their handkerchiefs, empowering them to be used for miracles.

As they waved their handkerchiefs and flashed the torchlights of their phones to signal the dawn of brighter life, the General Overseer prayed from the altar.

There have been several testimonies of how people have used the anointed handkerchiefs to heal the sick or even raise the dead.

When in the end, people who had been healed were called to the altar for blessings, there was a “flow like a river” as earlier prophesied.

The theme of the three-day Special Holy Ghost Service was “The Joy of the Lord,” under which Pastor Adeboye preached the “Birthday Service.”

Explaining the categories of the Joy of the Lord in his sermon, Pastor Adeboye identified the most common as regular joy, a dose of which individuals receive every morning to strengthen us, even after weeping at night.

He said: “Without the daily dose of regular joy we won’t have the strength to do normal things, taking a bath, performing household chores or going to work. People in deep depression are unable to do all those things.”

According to him, there better variants of the Joy of the Lord, which he explained as:

• Great Joy and it produces greater strength, as was experienced by Nehemiah and his team when they heard good news; it produced great strength to build the wall of Jerusalem. Great Joy will give the ability to run and to even fly. When the lame man by the Beautiful Gate was healed, he was able to walk, but he was also leaping and jumping and praising God. With Great Joy you are able  to do anything your heart desires for God.

• Joy Unspeakable, the opposite of which is sorrow unspeakable, the type Job  suffered  which made him say, ‘Why did I not perish at birth, and die as I came from the womb?’ Joy unspeakable produces strength unspeakable, which gives  the ability to perform unbelievable miracles or for unbelievable miracles to be performed through you: miracles that are difficult to testify about. If Joshua were to tell some people  he stopped the Sun for almost a day and made the moon stay where it was, they would have laughed at him.

• Everlasting Joy: No matter how great your Joy may be, it’s not good enough if it’s temporary. But it is possible for your Joy to last forever. The Bible says, ‘Therefore the Redeemed of the LORD shall return, and come with singing unto Zion; and Everlasting Joy shall be upon their head: they shall obtain gladness and joy; and sorrow and mourning shall flee away.’ Everlasting Joy is received when we beg God to forgive us of all of our sins in total surrender to Him.

Not all the special moments of the night were miracles. The over 2,000-strong Mass Choir of the church treated the congregation to inspirational songs, while powerful prayers were offered by notable persons including Pastor Mrs Folu Adeboye, the General Overseer’s wife.

As they streamed out of the auditorium in the early hours of Saturday, an elderly woman who is not a member of the church remarked” “What a beautiful day!”

The Special Holy Ghost service continued on Saturday with a Holy Communion and anointing service and was capped on Sunday with thanksgiving.