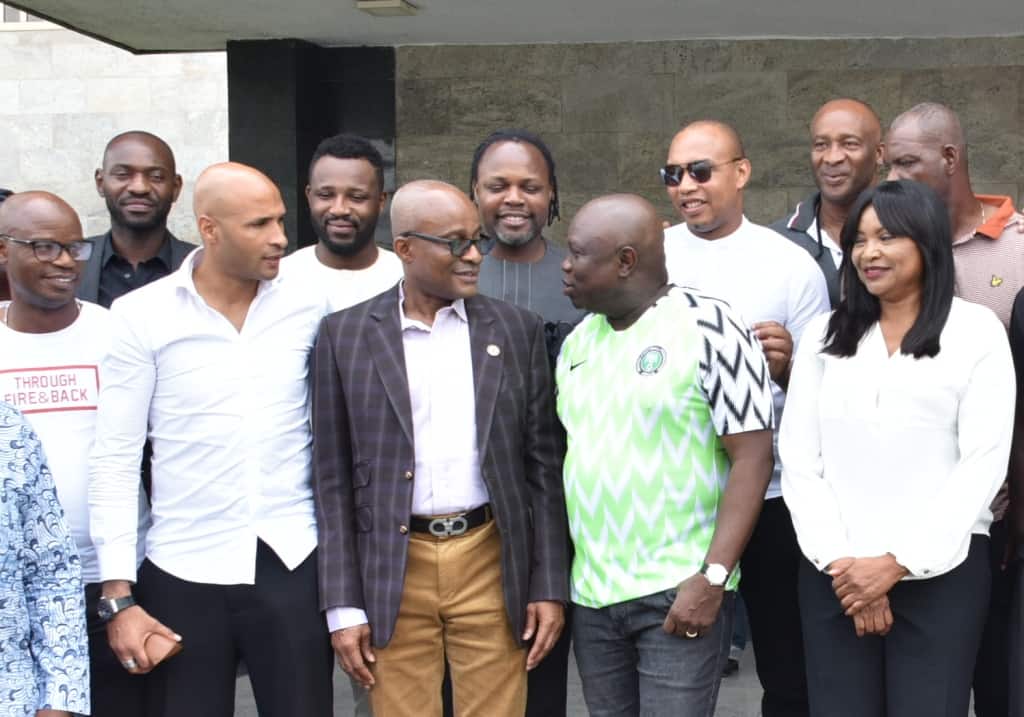 The Lagos State Governor, Akinwunmi Ambode, on Friday received top African football legends at the Lagos House in Alausa, Ikeja, urging countries in the continent to look inward and explore the possibility of using sports to grow their economies, saying sports remain a veritable tool to foster growth and development.
Some of the African soccer legends who paid a courtesy visit to the Governor include Kanu Nwankwo, Finidi George, Victor Ikpeba, El Hadji Diouf, Diomansy Kamara, Didier Zokora, Khalilou Fadiga, Austin Eguavoen, Mutiu Adepoju, Waidi Akanni, Uche Okechuku and Seydou Keita.
Ambode, while receiving some of the soccer legends that would be participating in a testimonial match on Saturday put together in his honour as he prepares to exit office, said the sense of brotherhood in sports must be played up for the benefits of the continent in terms of scaling up the Gross Domestic Product of African countries.
Recalling an initiative of his administration known as Project T.H.E.S.E, which stands for Tourism, Hospitality, Entertainment and Arts and Sports for Excellence, Ambode said right from inception, machineries were set rolling to use sports to grow economy and tourism in Lagos.
According to him: “We have always used sports to build bridges and there is this sense of brotherhood anytime that you switch on your television and there is an African playing on any line-up be it Liverpool, be it Tottenham, that feeling is always there and that brotherhood is something that we can use to grow the economies of Africa nations.
“I had this dream when I came in as Governor that I could use sports, tourism, entertainment and arts with some sense of hospitality to promote excellence. So, I had something called Project T.H.E.S.E and my dream was to catalyse everything around sports and use it to build tourism and also grow the GDP of Lagos.
“So, that was the dream and why we promoted as many sporting activities as possible so that we could create a platform for tourism which made many people to travel here and just like you have come now, you will lodge in our hotels and the hotels at the end of the day would pay taxes and then we use it to do the infrastructure that we are doing.”
Ambode said though four years may not be enough to do everything, but he was grateful to God for the opportunity to serve the people, just as he expressed optimism that the next administration would take it up, improve on it and ensure that the dream and vision for sports development never dies.
He said: “I am very honoured that you are all here in Lagos to celebrate with me as I finish my tenure in Lagos State. This match is not only for me but for the good of humanity. We are not promoting it because we want to make money out of it but we are actually showcasing the fact that there is still something to be done about sports development in Africa and then particularly in Nigeria.
“We have lost a lot of resources and economic growth because people can’t match sports with the economy and that is the mis-match that we are having here. I mean, the question is why do I have to travel to Madrid to go and watch La Liga, meanwhile I will pay airline, pay for hotel and grow the economy of Spain?
“That is what Africa has to find out and then maybe as I leave office, it might just be my next venture to do something around sports and use my intellect to find a way to match sports with our economy and all of you here are all Ambassadors in your own rights and that is the only way we can continue to pull resources together because we must understand that the future of Nigeria is actually in the service industry – in sports, in creative arts, in things that are innovative whereby people can use their talents to earn income and I pray that one day we would have sporting companies that would be on the Stock Exchange.”
Speaking on behalf of the footballers, Diouf thanked Ambode for the opportunity for him and others to be personally here in Nigeria to see the fans, vowing to run the show with exciting display during the match on Saturday.
Also speaking, Aliou Goloko, a French sports journalist, said Ambode deserved to be commended and appreciated for making Lagos a safe place, adding that the soccer legends were also drawing inspiration from the purposeful leadership of the Governor.
Goloko said: “It’s very important for everybody to know that all these African legends came to Lagos because of the Governor. The Governor made it possible because when Waidi Akanni came to us and said we have to go to Lagos, there was no fear to come to Lagos. You (Governor Ambode) have made Lagos a safe place; a place of humanity and a place of solidarity.” 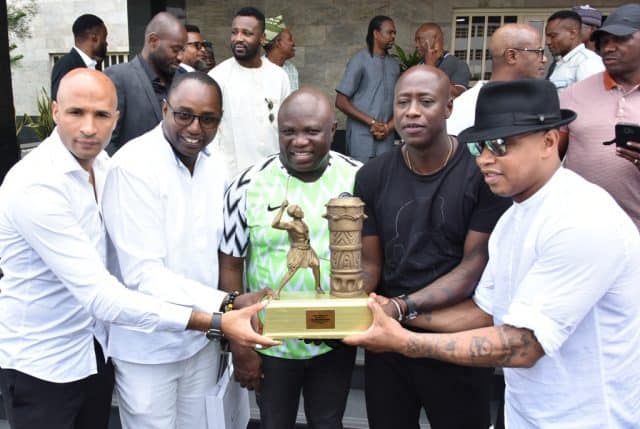 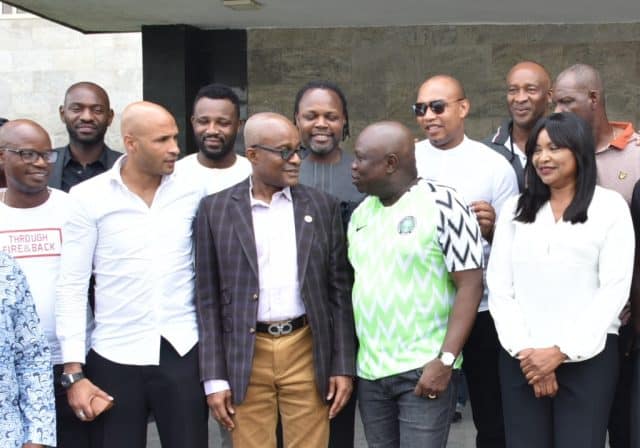 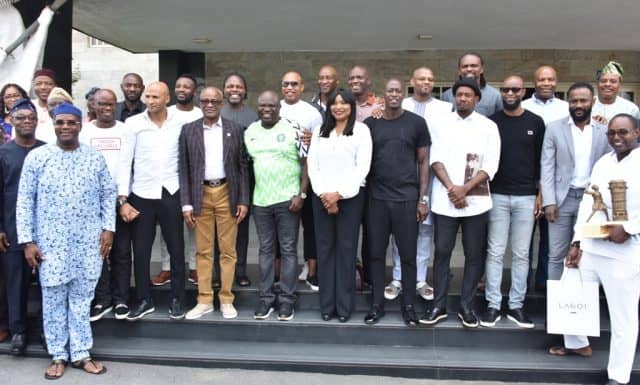 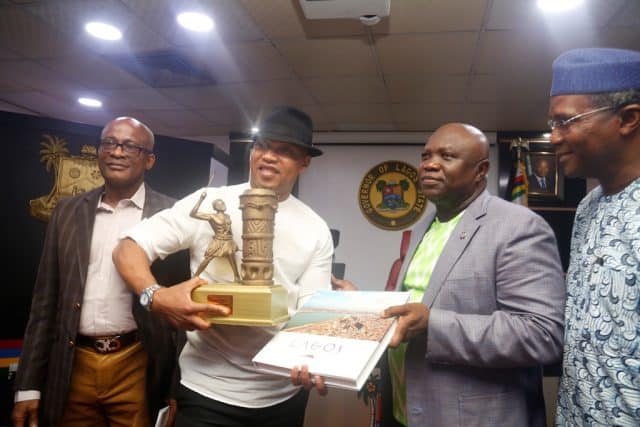 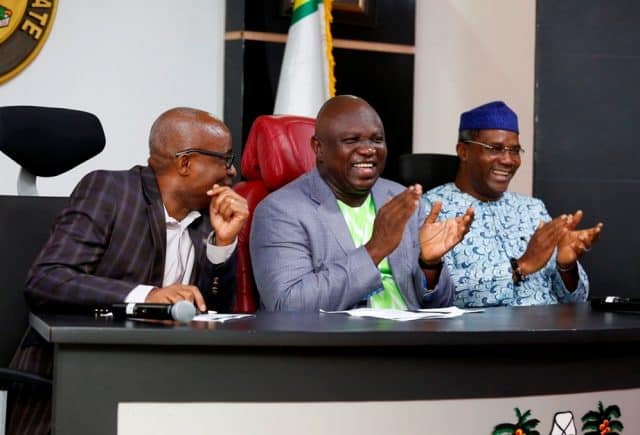