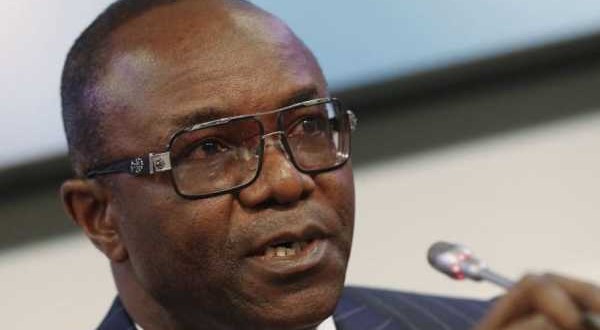 Share
Facebook Twitter LinkedIn Pinterest Email
Not less than N1.4 trillion is now being spent annually by the Nigerian National Petroleum Corporation as subsidy on Premium Motor Spirit, popularly known as petrol, by the Federal Government.
The Minister of Petroleum Resources, Dr. Ibe Kachikwu, disclosed this on Thursday at a Liquefied Petroleum Gas workshop organised by the Federal Ministry of Petroleum Resources in Abuja.
Described as under-recovery, Kachikwu said NNPC has been shouldering the huge financial burden because it is the country’s supplier of last resort when it comes to the provision of petroleum products.
He also said the ministry plans to unveil an infrastructure rebirth map for the oil and gas sector in two months.
The Group Managing Director of the NNPC, Dr. Maikanti Baru, explained that the multiplication of filling stations had energised unprecedented cross-border smuggling of petrol to neighbouring countries, making it difficult to sanitise the fuel supply and distribution matrix in Nigeria.
Baru said a detailed study conducted by the NNPC indicated strong correlation between the presence of the frontier stations and the activities of fuel smuggling syndicates.
He said the activities of the smugglers led to the recent abnormal surge in the evacuation of petrol from less than 35 million litres per day to more than 60 million litres per day, which was in sharp contrast to the established national consumption pattern.
Providing a detailed presentation of the findings, the NNPC boss noted that 16 states, having among them 61 local government areas with border communities, accounted for 2,201 registered fuel stations.
He stated that the tanks of the stations had a combined capacity of 144,998,700 litres of petrol.
Baru equally said eight states with coastal border communities spread across 24 LGAs accounted for 866 registered fuel outlets, with combined petrol tank capacity of 73,443,086 litres.
He said because of the obvious differential in petrol prices between Nigeria and other neighbouring countries, it had become lucrative for smugglers to use the frontier stations as a veritable conduit for the smuggling of products across the borders.
This, he said, had resulted in a thriving market for Nigerian petrol in Niger Republic, Benin Republic, Cameroon, Chad and Togo, as well as Ghana, which has no direct borders with Nigeria.
He said: “The NNPC is concerned that continued cross-border smuggling of petrol will deny Nigerians the benefit of the Federal Government’s benevolence of keeping a fixed retail price of N145 per litre despite the increase in PMS open market price above N171 per litre.”
Dr. Ibe Kachikwu Federal Government Minister of Petroleum Resources Nigerian National Petroleum Corporation Premium Motor Spirit
Share. Facebook Twitter Pinterest LinkedIn Tumblr Telegram Email