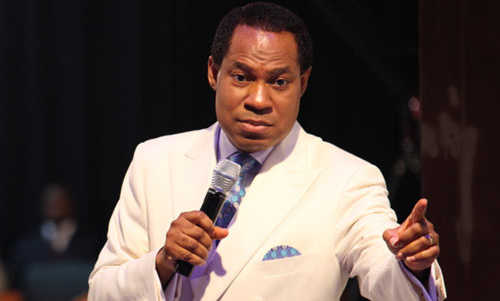 Former Governor Peter Obi of Anambra State, Vice Presidential candidate of the Peoples Democratic Party in the 2019 general elections; Governor Godwin Obaseki of Edo State; as well as former Governor Virgy Etiaba of Anambra State on Saturday felicitated with the Founder of the Loveworld Inc, also known as Christ Embassy, Dr. Chris Oyakhilome, on his birthday anniversary.
Obi in his facilitation message, on behalf of his family, dated December 7, 2019, expressed his sincere congratulation of the Man of God on his birthday, giving God all the glory for the auspicious moment in his life.
Obi said: “As the founder of the Loveworld Inc, also known as Christ Embassy, you have remained consistent in preaching Christ to the world. Your charismatic leadership has remained an inspiration to younger pastors desirous of propagating Christ among all nations.
“Besides, your publication – Rhapsody of Realities – has remained an enduring Christian literature of all times.
“May I note that you have also continued to contribute to the growth and development of humanity through your activities in education, care for children and support for the less privileged as well as those challenged by the vicissitudes of life.
“I note with joy, your recent donation of a tuition-free school and a health centre to the Demsa community in Adamawa State through your Foundation – Chris Oyakhilome Foundation International.
“Our prayer is that God will continue to guard and guide you as you work in his Vineyard. May He give you the strength and courage to continue to speak against the ills of our nation.
“Once again, I congratulate you and assure you of my best wishes now and always.”
Obaseki eulogized Pastor Oyakhilome for his commitment and devotion to planting seeds of the gospel across the globe, noting that posterity will always remember him.
Governor Obaseki declared: “On behalf of the Government and people of Edo State, I congratulate you, Rev. Dr. Chris Oyakhilome, President of Loveworld Inc. also known as Christ Embassy, on this auspicious occasion of your birthday celebration.
“Edo State is proud to have a revered Christian leader like you, who has planted seeds of the gospel across the globe, for which posterity will always remember you.
“Your exemplary lifestyle, which epitomizes the virtues of honesty, peace, patience, contentment, humility and diligence, is a motivation to millions of citizens in our dear state, who have been immensely blessed by your ministry.
“I commend your astute social and humanitarian interventions that have continued to complement the efforts of governments in providing a better, rewarding life for the people and residents of Edo State.
“I enjoin you to continue in your highly impactful service to God and humanity, as I pray that the Almighty God grant you long life and more strength to carry on the good work.”
Etiaba, Nigeria’s first female Governor, described the celebrant as an immense visioner, a most creative thinker, and a great man of God who has decided to accomplish extraordinary things.
“You have certainly achieved the most unimaginable feats in His Vineyard. Words are not enough to capture your exploits in the service of our Lord but you see,” Dame Etiaba had declared in a goodwill message sent through the Dame Virgy Etiaba Foundation.
The former governor acknowledged Pastor Oyakhilome’s foundations and initiatives, including the Trauma Care International Foundation, which have continued to provide humanitarian service to the benefit of millions of people in Nigeria and around the world.