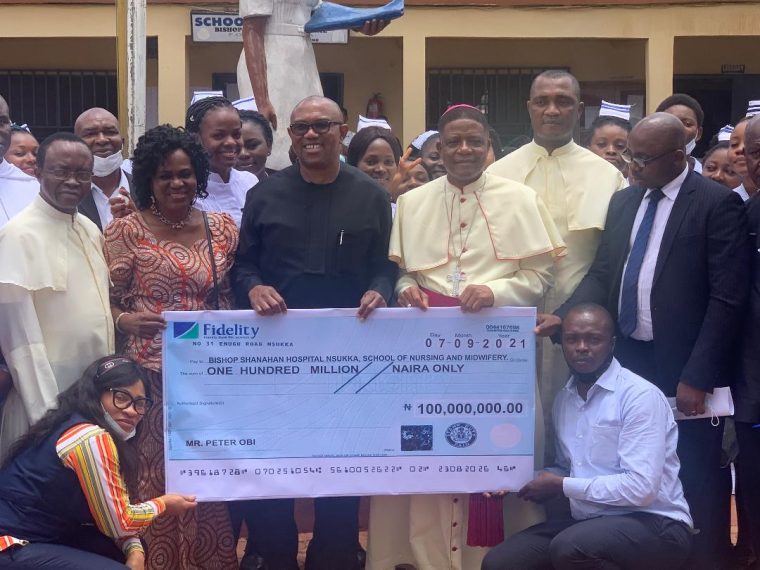 The Vice Presidential Candidate of the Peoples Democratic Party for the 2019 elections, Peter Obi, on Tuesday made a donation of N100 million to Shanahan Specialist Hospital, Nsukka, Enugu State for their School of Nursing, Midwifery and Health Technology.

The cheque for the sum has been presented by Obi to the hospital for the project that will last three years.

Obi appreciated the Governor of Enugu State, Ifeanyi Ugwuanyi, for “his support and commitment to serving his people by ensuring the growth of the most critical measure of development”.

He said his mission at the hospital would not have been possible without the intervention of the Governor.

Presenting the cheque to the Proprietor of the Hospital and Catholic Bishop of Nsukka Diocese, Most Rev, Godfrey Onah, at the hospital premises, Obi also stated the urgent need for more investment in Nigeria’s health sector, especially at the primary level, adding that nurses and midwives play very critical roles in healthcare delivery.

He said: “We cannot talk about health, especially primary healthcare, which is the most critical, without talking about the contribution of nurses and midwives.

“Nurses and midwives account for over 50 per cent of global health workforce.

“They are key to the achievement of universal health coverage.”

Obi added that there is shortage of nurses and midwives not just in Nigeria but globally, and that by 2030, more 10 million nurses will be needed in the global health sector.

He said it is imperative, therefore, to set up and equip colleges of nursing sciences and schools of midwifery to train health professionals who will fill in the gap.

Onah, welcoming Obi and appreciating his kind gesture, described him as a lover of humanity.

Recalling how Obi had remained supportive of the hospital, even when he was the Governor of Anambra State, Bishop Onah said the PDP vice presidential candidate in the 2019 elections, loves to identify with and help those in need.

Onah described Obi as one who has the practical ideas to change Nigeria for the better.

He urged Obi to hold on to his integrity, which, he said, stands him apart.

He said: “There are many politicians who are as intelligent, smart and influential as Peter Obi.

“However, Peter Obi’s integrity stands him out from them all.

“Throughout his years in the shark infested waters of Nigerian politics, Obi has refused to be stained by the corruption that pervades the entire political system.

In their respective speeches, the Hospital Administrator, Rev. Fr. Greg Onah, and the Director of Health Services, Nsukka Diocese, Rev. Fr. Mellitus Ossai, described Obi as a friend of the needy.

In the words of Dr. Ossai: “Obi’s generosity and support are exceptional because he not only responds to appeals but goes out to seek for and help many others.”

They prayed God to bless Obi and give him the platform to touch more lives.