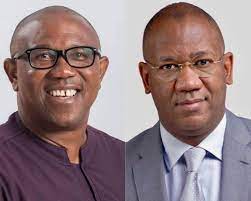 The presidential candidate of the Labour Party, Peter Obi, and his running mate, Dr. Yusuf Baba-Ahmed, have expressed sadness over the gruesome killing of Daniel Yatai, 86, by gunmen.

Yatai, he father of Philip Yatai, a Principal Correspondent of the News Agency of Nigeria, was killed by gunmen.

He was shot dead around 11:15pm on August 2, 2022 at his home in Manchok, Kaura Local Government Area of Kaduna State.

Obi and Baba-Ahmed in a telephone call with the eldest son of the deceased, Patrick Yatai, on Saturday, consoled the family and urged them to accept the sad incident as the will of God.

Yatai, who made this known in an interview with NAN in Manchok, said that the Labour Party presidential flag bearer urged the family to give thanks to God in all circumstances.

He said: “They grieved with our family and encouraged us to stay strong and strengthen our belief that God is in control.

“Obi particularly said that God allowed our father to die for a reason.”

“On his part, Baba-Ahmed pointed out that everyone has a time to die and encouraged us to accept our father’s demise as a call from God.”

Yatai added that the labour party presidential candidate and his running mate also asked the family to continue to pray for the country for things to get better.

He said that his father, who had been buried on Friday, was a retiree of the Nigeria Railway Corporation who had lived a fulfilled life.

“He was a jovial fellow with a big heart full of love.

“We will uphold his legacy and keep his memories alive.”