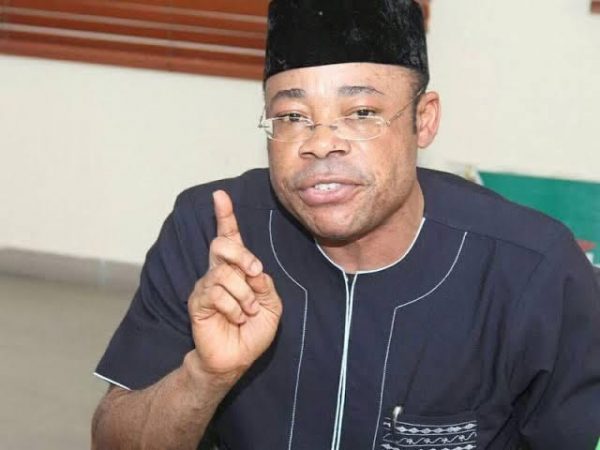 By way of a preamble, let me quickly preempt and lay to rest the prevailing mood in the country: the paramount question for Nigerians at the moment is to restructure our dysfunctional political system; the 1999 Constitution is both the progenitor of a dictatorship and thus a fraud. All Nigerian patriots accept these fundamental flaws in our system, as do I.

Now let’s proceed. The status of the Peoples Democratic Party presently is pretty much like a vessel sailing on the Atlantic engulfed by the raging tempest of zoning. The Party’s very survival beyond 2023 depends singularly on the ability of its leadership to appreciate the existential nature of this problem and to devise the strategic seamanship required to bring the vessel successfully to berth at shore.

It is my simple submission that zoning envisages the positive consequence of actually electing a president from the target section of the zoning arrangement. Zoning is not done for its own sake. That would amount to absurdity upon stilts, to paraphrase Jeremy Bentham. The essential kernel of zoning is to produce a tangible outcome and not the fulfillment of empty political righteousness.

Preamble 2 (d) of the Constitution of the PDP (as amended in 2012) provides: “To conform with the principles of power shift and power sharing by rotating key political offices amongst the diverse peoples of the country.”

Please note specifically the expression of “power shift and power sharing.” This is the phrase that must thrust as a rapier into the heart of any opponent of the true intendment of power sharing. Running for office is one thing. Attaining power is a different measure altogether.

The party zoned its presidential ticket to the South in 1999 in a deliberate, calculated and managed effort to give rise to the almost universal desire at that time to produce a president of southern Nigerian extraction. In propelling Chief Olusegun Obasanjo to a successful election to the presidency, the party achieved the positive consequence of zoning.

In 2007, the PDP zoned its presidential ticket to the North after a dangerous contemplation to retain it in the South. In President Umaru Yar’Adua, the party achieved a positive consequential outcome of that zoning.

Following the death of President Yar’Adua on May 5, 2010, Dr. Goodluck Jonathan ascended to the presidency. But it could be argued that his ascent was nominally November, 2009, while President Yar’Adua ostensibly lay in his dying bed in Saudi Arabia.

In the 2011 presidential cycle, the unprecedented historical political circumstances that faced the country in terms of its presidential politics, created an extremely tense political atmosphere not just within the PDP but in the entirety of the national polity. Through hard politicking, deploying the enormous array of the tools of federal power at his disposal and with added impetus by Chief Olusegun Obasanjo, President Jonathan prevailed. He ran a roughshod through the normative consensus of power shift within the party. In so doing, he lost the trust of a huge coalition of northern Nigerian members and supporters of the party.

By the time President Jonathan handed over to the All Progressives Congress president-elect on May 29, 2015, he had occupied the presidency for over five years.

It was quite right and proper for the PDP to zone its presidential ticket to the North in 2019. But, unfortunately for the party, the consequential outcome was negative. In other words, the attempted power shift was not consummated by the simple act of running for the office. Zoning is consummated when its consequence is a positive outcome – power shift.

As I previously submitted, zoning is not simply for its own sake. It must achieve the desired objective of electing a candidate from the target region in order to give practical meaning to the foundational philosophy of zoning.

Under the PDP zoning arrangement, from 1999 to 2015, the South has occupied the presidency for about 13 years. The North did so for just about two years. There is practically no scenario in which this picture would present an attractive view to co-equal partners in a political movement unless one partner is satisfied with exploiting the other and the exploited partner is conversely content with its inferior status.

For the purposes of examining the conundrum facing the PDP as it contemplates its options against 2023, consideration of the historical balance of presidential power dating back to 1960 is irrelevant. Of course, I recognize that there will be those who will bitterly rail against this argument, and with some justification. But it still remains irrelevant for present purposes.

If the Zoning principle was practically and philosophically designed to take into account the historical asymmetry of presidential balance of power as between North and South right from 1960, then I submit that a methodical means of redressing it, and still make sense of the zoning arrangement that is forward-looking, would have been devised and entrenched in the party’s constitution. I do not see how such a potentially convoluted arrangement could have been designed and structured.

As an autonomous national entity, the party and its membership should not (or at least ought not) point to the arrangements in other political parties in order to support the argument that the North has occupied the presidency for x number of years. Such an argument cannot be sustained on any reasonable or rational grounds, legal or moral. The only passing observation to be made in that respect is to say that the APC will fall into its own moral turpitude should it fail to zone its presidential ticket to the South in the same way that the PDP will fall into legal delinquency if it fails to zone its presidential ticket to the North (if matters contained in its constitution are justiciable).

Recently, some politicians from the South East have been issuing public ultimatums and threats to the party to the effect that the ticket must be zoned to the region and that the national chairman of the party Uche Secondus must be retained in his position. To those who are perpetually ready to launch scathing criticisms against Igbo politicians and their perceived naivety in conducting national politics, this is grist to their mills. The mere notion of issuing such an ultimatum and making it public is quite staggering in its blind illogic and small mindedness.

There are many routes to decamping to a different political party but this sort of juvenile manoeuvring and gesture politics, bereft of thought and reflection, is definitely not one of them.

Northern members of the PDP have every right to demand that the presidential ticket of the party be zoned to the North in the 2023 presidential cycle. The party is legally and morally bound to concede to the merit of such a demand.

Imposing imperial arrogance and selfish power quest on the party will spell its end, and let it not be said that the warning did not ring loud and clear.