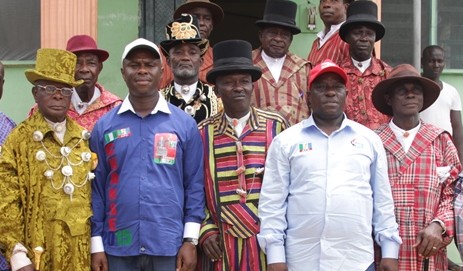 Chief Igbikioyibo Dokubo, the representative of the Amayanabo of Ido Town, has said that the Peoples Democratic Party will be history in his community and Rivers State come March 28.
Dokubo made the declaration when Dr. Dakuku Peterside, the governorship candidate of the All Progressives Congress, paid him and the Council of Chiefs a courtesy call during his ward congress in Ido and adjoining communities.
He said: “Your Excellency, we have to thank you for coming here today.
“It shows that you care about us.
“This is the first time a governorship candidate will be coming to see us.
“We appreciate and we are also grateful to Governor Chibuike Rotimi Amaechi for supporting a worthy successor.
“Let me use this opportunity to say that we the riverine people are grateful to Amaechi for fighting for us.
“Most of Amaechi’s battle is for us in the riverine.
“We know it and we appreciate our able governor.
“He has shown beyond doubt that he is a man who believes in justice and equity.
“Therefore, we will vote massively for APC come March 28 and we will ensure that there is no PDP in this area after that date.
“APC has done a lot for us, so it will amount to ingratitude if we fail to reciprocate.
“We bless you Your Excellency because God’s favour is on you.”
Similarly, Ibinabo Dawari, the former Caretaker Committee Chairman of the local government, pledged the total support of sons and daughters of Ido, promising to deliver all the wards to the APC.
In his response, Peterside thanked the people of Ido for their support and promised to be fair to every part of Rivers State.
He told them that government should be for every part of the state irrespective of size or location, adding that his government will serve both the majority and the minority tribes. He also thanked them for appreciating the battles and sacrifices of Governor Amaechi for the riverine people and promised to convey their sentiments to the governor.