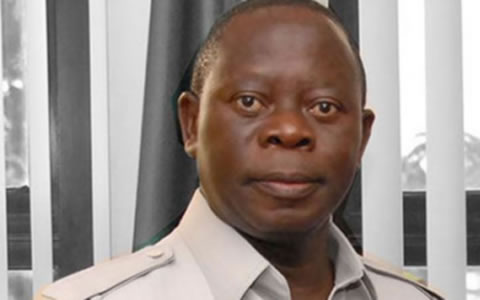 Governor Adams Oshiomhole says the Peoples Democratic Party is an anti-worker party, which purged the public service of over 7,000 workers in one fell swoop, without paying their pensions and gratuities.
Also, the Governor has assured the workers in Egor Local Government Area, which was omitted from the recent bailout for other Local Governments in the state, that their arrears will be paid this week.
Speaking at a gubernatorial rally of the All Progressives Congress at Olua Primary School in Egor Local Government Area on Wednesday, Oshiomhole said the PDP has a deep-seated hatred for workers and teachers as they were shabbily treated in the 10 years they were in the saddle.
According to him: “The choice is between two political parties, one which in seven and half years has redefined governance and another which in 10 years treated workers shabbily.
“When Nigeria was doing well and PDP was in government in Edo State, don’t forget, the first thing PDP did with Ize-Iyamu as Secretary to Government was to dismiss about 7,000 civil servants.
“They sacked them because, according to them, they wanted to reduce labour cost, when actually they wanted to take the money and privatise it.
“That is not all they did.
“When they dismissed the workers, they didn’t pay them their pension, they did not pay them their gratuity.
“So I need our pensioners to remember that the PDP carried out retrenchments, but we never carried out retrenchments.
“I never carried out mass dismissals in our public service.
“When PDP was here, they issued a circular to the Head of Service banning employment into the public service.
“They stopped employment into the State Health Management Board.
“When I came in, I lifted the ban, recruited civil servants and employed over 1,000 teachers.
“When the PDP was here, in four months, five months, six months, Nigerian Union of Teachers will remember, with Ize-Iyamu as Secretary to Government, they were not paying salaries and the teachers had to alternate on which days to attend classes to make ends meet.
“The classrooms were leaking with potholes inside the classrooms.
“So many male teachers left, leaving only the women who were hoping that one day God will intervene and God intervened and APC came.
“Today, I am proud to say of the 36 states in the federation, the Edo teacher is the first to be paid and we are up to date in the payment of teachers’ salaries, whether primary school or Junior Secondary School or Senior Secondary School.
“I am proud to say that in Edo State, teachers are the most prominent to be paid and we will continue to pay them, no going back.
“In Edo State, we see the worker, not as a cause agent, we see the worker as the engine of growth if properly managed and that is why even this week, if you are in the employment of Edo State Government, you are already getting alert.
“So God win!
“So, even the one omission, when Egor was omitted, I’m happy to say that this week, not next, those Egor Local Government workers will be paid.
“So I believe in the worker.
“When they said the minimum wage was too high, I said no, it is too small and we increased it from N18,000 to N25,000.
“They said it’s a May Day joke, but we are already paying it.
“Even those on Level 17.
“And by the way, the highest level for an Edo public servant was Level 16.
“Today, they can go up to Level 17 like their Federal counterparts, because for me, the Edo worker is not inferior to their Federal counterparts.”
The Governor said the state Government has paid about N26 billion of Bond taken for water storm masterplan project, adding that the first phase of the project will be completed this December.
Oshiomhole noted that aside the deep drains to de-flood the state capital, 10 roads with street lights, underground drains as deep as four metres and six metres wide are included in the stormwater project.
On his part, the gubernatorial candidate of the APC, Godwin Obaseki, said his government will focus on human capital development, adding that to achieve this, industrialisation, technology and large-scale agric farms will be established to provide jobs for the youths.
Obaseki said Edo State will plug into the Federal Government’s scheme where the poorest in the society will get a N5,000 succour monthly.
He assured the women that they will get soft loans to empower women which will grow the economy.

Why I am playing local politics – Oshiomhole