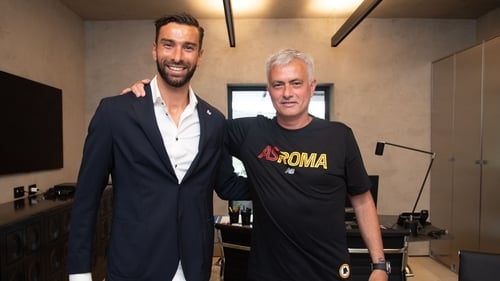 Portugal goalkeeper Rui Patricio has joined Roma from Wolves for an undisclosed fee.

The Premier League club confirmed the deal, which Roma stated to be for an initial £9.8 million on Tuesday evening.

Patricio, 33, becomes Jose Mourinho’s first signing since the former Tottenham boss was appointed as head coach at Roma in May.

“Roma is a big club and a new challenge and I’m excited to try and help the club achieve its targets,” Patricio said on www.asroma.com.

“In Jose Mourinho we are talking about one of the greatest coaches in the world and I am excited to start working with him and doing everything I can to help the team.”

Patricio joined Wolves in 2018 after requesting to leave Sporting following an attack on the Lisbon club’s training ground by fans.

The veteran goalkeeper made more than 135 appearances for Wolves, with 37 clean sheets, and helped the team qualify for Europe under former boss Nuno Espirito Santo.

Wolves technical director Scott Sellars said on the club’s official website: “We would all like to thank Rui for everything he has done for Wolves during the past three seasons.

“He has been part of the best years of the club’s recent history, in terms of the success we have had, coming to us when we were newly promoted and helping the club to achieve two seventh place finishes.

“He’s been a fantastic servant to the club, but it’s a fantastic opportunity for him to experience a new club in a new league, and a good move for everybody involved. We certainly wish him the very best of luck at Roma.”

Patricio was Portugal’s number one in goal for Euro 2020 as the 2016 winners reached the last-16.