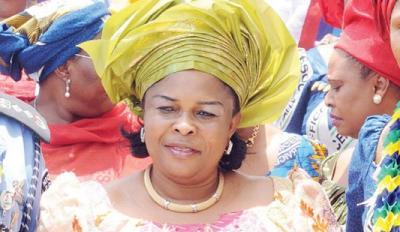 There was anxiety in Port Harcourt on Monday as news of the death of Mrs. Iwari-Oba, the mother of the wife of President Goodluck Jonathan, Patience, spread in the Rivers State capital.
The mother of Mrs. Jonathan was said to have been involved in a ghastly motor accident along Elele Road in Rivers State.
It was gathered that the woman, who is from Okrika Local Government Area, was on her way to Bayelsa State when the accident happened.
Unconfirmed report indicated that her corpse was taken to Kpaiyama Mortuary by a team of policemen and a member representing Ogu Bolo State Constituency, Hon. Evans Bipi, who is a relative to the deceased.
Though, the police and the Federal Road Safety Commission in the state could not confirm the incident, an aide to Bipi said the First Lady’s mother died in a road accident, which occurred at about 4pm.
Bipi’s aide, Mr. Fred Itobo, told The PUNCH that the President’s wife’s mother was involved in the accident while she was on her way to Bayelsa State.
“Yes! She was involved in an accident and she died. Her body has been taken to a mortuary. Bipi was among those who took her body to the mortuary,” Itobo said.
When contacted, the state Director of FRSC, Dr. Kayode Olagunju, declined comment on the matter, saying: “I cannot say anything on this matter now until I get full details.”
Though effort to get reactions from the state Police Public Relations Officer, Angela Agabe, proved futile, she had already told a journalist on the telephone that she had not been briefed on such crash.