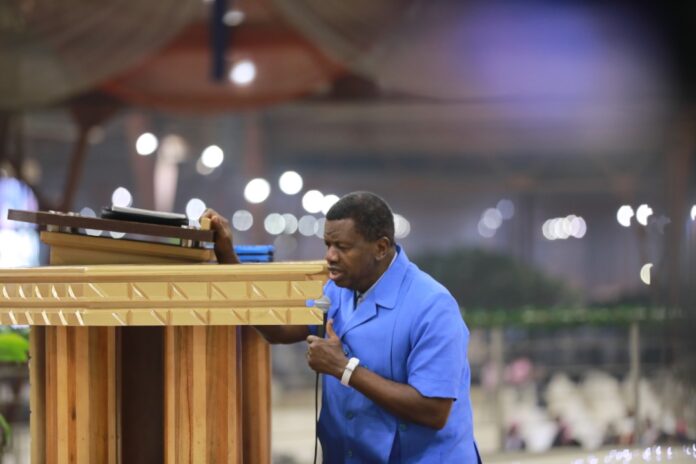 As parts of his 2020 prophecies begin to manifest at a fast pace, the General Overseer of the Redeemed Christian Church of God, Pastor Enoch Adeboye, and the church have called on God for mercy.
Adeboye had, among others, prophesied that there would be a surge in the cases of natural disasters and fire incidents.
He had said: “This year is going to behave like a child having convulsion unless we pray very well. Earthquakes in many places. Volcanoes that have been dormant for years erupting.
“If you look at the prophecies for 2019 for the international scene, you will see fire and flood. The Lord says whatever we have seen in 2019 is nothing compared to what is coming, except his children will pray so that His healing hands will be upon the nations of the world.
“The reason is: sin is becoming more rampant. Things that in the past could not be mentioned are now being celebrated and God is angry, but He will help if we can pray.”
At the February Holy Ghost Service of the church, with the theme: “Let there be Light II,” Pastor Adeboye said before delivering his sermon that he was not a prophet but a pastor and therefore could not be anxious about the manifestation of prophecies because he says what he is shown by God.
A prophecy could be described as a prediction of what will happen in the future or the practice of prophesying.
Some men of God are prophets.
The pastor, noted for Miracles, Signs and Wonders, is known by members of the church to pray regularly to avert disasters so they readily understood that another round of congregational prayer indicated the seriousness of the issue.
They responded with rapt attention as he called for prayers for God’s intervention, especially in countries like Nigeria, which have relatively poor preparedness for natural disasters:
Pastor Adeboye said: “At the beginning of this year, you heard me say that the Lord had said of the international scene, including Nigeria, that there would be fire outbreaks, flood, storms, earthquakes, volcanoes. That what we saw in the past was child’s play. If you follow the news all over the world, you would know what is already happening.
“In January, just one month into the year, the number of fire outbreaks was already high. And if the Lord says we haven’t seen anything yet, then we need to pray.
“Please stand on your feet and join me in crying to this our God and say: ‘Father, have mercy on Nigeria.’
“Please cry to Him – no fire outbreak, no flood, no storm, no earthquake – Have mercy, Almighty God!”
Pastor Adeboye said he would not be bothered if some parts of the prophecies don’t happen and people call him a false prophet.

There are enemies out there
The service had started with congregational prayers followed by intense praise and worship, which has become one of the high points because of the mass participation of the congregation.
Amazing testimonies were shared and Pastor Folu Adeboye’s Prayer for Nations was actively participated in by the congregation.
Two pastors of the church delivered the first and second messages on the theme of the day: “Let there be light,” which was the second in the series of the same title.
As always, Pastor Adeboye draws rapt attention of the congregation, children inclusive, anytime he mounts the pulpit.
In the pin-drop silencethat fell on the auditorium, he went straight into prayers. The whole sermon was transcribed the Discovery Media Crew.
The first part, which is usually for the salvation of souls, reminded the congregation of how God saves us from threats to life, including those we don’t see.
“There are enemies out there; everyday the devil is looking for you to destroy you,” he pointed out, citing the scriptures: “Your enemy the devil prowls around like a roaring lion looking for someone to devour.”
He said the demonic enemies, also called “hunters,” are everywhere looking for victims to destroy. They include adulterous women smiling at men in feigned love.
“Even brothers could be hunters like Joseph’s brothers who threw him into a pit and later sold him into slavery,” he said, stressing that the reason we are alive today is God’s mercy.
“If you say you are fortified with charms, there are people with stronger charms to counter yours. The hunters know your weaknesses and can easily get at you through them.”
Pastor Adeboye cited an experience he had before he gave his life to Jesus Christ: “As a young man, I was doing very well. Before I was 30, I had already built a house and owned a car. I was a lecturer in the university. Everything was going fine, except for one little problem.
“Several years before then, way back in the 1960s, there was a misunderstanding between my father and other members of the family over the issue of which party to belong to and the people in the family threatened to kill me.
“When my father came home to tell us what transpired at the meeting, I ran away from home for 13 years till I met the Lord Jesus Christ. Thank God for Jesus.
“While in exile, it occurred to me that if the village people claimed they had charms to kill me, there could be superior charms elsewhere. Somebody took me to a village, somewhere not too far from Akure, Ondo State. They took me to the head herbalist there and I told him I wanted to be fortified so that nobody would be able to harm me. He said: ‘No problem, I will fortify you!’
“He listed the requirements and told me the total cost. That was not a problem because I had the money to pay. He performed all kinds of rituals and kept on insisting I come back and get more. Then one day, the juju man looked at me and asked: ‘What is the name of that your town where they say you shouldn’t go back to?’
“I told him. ‘Ah!’ he shouted. ‘You are from that place?’
“I said: ‘Yes sir.’
“He said: ‘If they ask you not to come, don’t go.”
“‘What are you talking about? I asked.
“‘Let me tell you the truth. My father was the chief herbalist in this village, his grandfather was the chief herbalist before him and he inherited everything from them. When my father was taught everything he knew, he sent me to your village to get more powers. Whenever I was visiting your village, before I got to the outskirts, I would go into the bush to bury everything and then when I am going back, I would go back into the bush to pick it up. Any power you take into that village will turn to water as soon as you enter.
“I was surprised to hear all that because I thought I had been fortified. If you put your trust in the devil, not only will you die, but you will die miserably.
“For a long time, I kept running from home until I met Jesus. When I did, my flight from home stopped. Praise God that the forces of darkness that hitherto put me to flight now take to their heels when they see me because I now carry the Lord inside of me.”
Continuing, Adeboye explained that when we pray: “Let there be light,” one thing the light does is that it opens our eyes of understanding to see that life is war; a continuous war waged by the hunters from our birth to death.
And the only reason for our confidence that the hunters cannot destroy us is that God makes us conquerors.
When the altar call was made, several people responded promptly in both auditoriums at the Redemption Camp for salvation. It excites the revered pastor to get people saved and that was obvious in his body language.

Let there be light
The main message, under the same theme, followed with the explanation that when God said: “Let there be light,” in the creation story in Genesis, He meant let “morning begin” because up till that moment it was all dark.
Further down in the Book of Genesis, he continued, the Bible kept on saying: “In the Evening and in the Morning, the First Day!”
Adeboye added: “When He says, let there be light in an individual’s life, it means the end of weeping in the night, there is joy in the morning.
“Psalms 30:5 says: Weeping may endure for a night; joy comes in the morning.
“So let there be light (or morning) means, let sorrow cease.”
He described sorrow as a very dangerous experience. “Sorrow dims vision; it can make man sleep at a time when he should be praying.”
According to him, other meanings of “Let there be Light (or Morning)” could be: let there be a new beginning or restoration; let there be a brand-new creation in your life; let the siege of the enemy stop; or that the opportunities for one to achieve one’s goal should not cease.
“So when God answers our prayers by saying: ‘Let there be light,’ our lives change in many ways for the better,” he added.
He shared another testimony to explain this: “Years ago at the National Stadium in Surulere Lagos Nigeria, we had a Holy Ghost Service Night and the whole place was packed with people sitting on the railings, sitting outside the stadium, etc.
“And there was a man there with a big goitre – a big swelling around his neck. A sister sitting beside him and you know if you have that kind of problem, people won’t even see your face, they will see the problem. The sister had been stealing glances at him.
“Then the Word of God came to me that was somebody in the congregation with a big swelling around his neck but that the swelling was gone.
“The sister sitting next to him turned to see and noticed that the goitre had disappeared.
“She was so shocked that after the programme she trekked all the way from Surulere to Palm Groove (Both in Lagos, Nigeria) before she remembered that she had parked her car at the stadium.
The service ended with congregational prayers along prayer points he had given.
• Photo credit: Segun Komolafe.