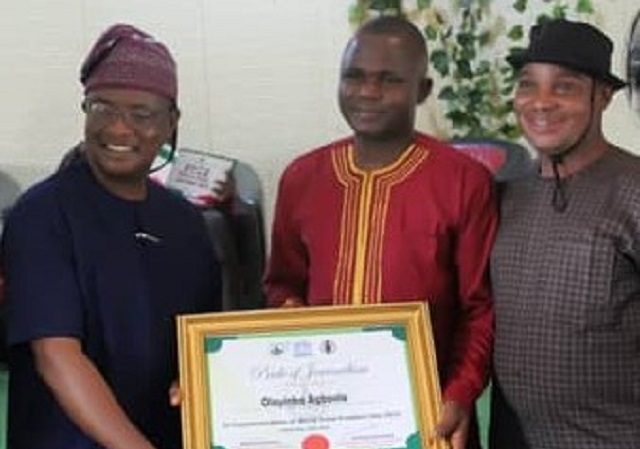 The Publisher of Parrot Xtra Magazine, Olayinka Agboola, has been honoured by the Oyo State Council of the Nigeria Union of Journalists with the “Pride of Journalism” award.

The award ceremony was part of the activities staged by the Oyo NUJ to mark this year’s World Press Freedom Day.

In his welcome address to kick-start the event, which held at the Press Center, Iyaganku, Ibadan, the Oyo State capital, Comrade Ademola Babalola, the Chairman of the council, admonished journalists to always adhere to safety measures even while carrying out their constitutionally assigned roles.

Others who got honoured at the event included Abike Dabiri-Erewa, the Chairman/Chief Executive Officer of the Nigeria in Diaspora Commission; Chief Dotun Sanusi of Ilaji Sports Resort; and Bolatito Joseph, Federal Radio Corporation of Nigeria’s Zonal Director in Ibadan.

While speaking after he received his award, Agboola, who is also the Chairman of South West Group of Online Publishers, tasked Nigerian journalists on the need to develop passion for what they do, adding that this will further propel them to be more creative and result oriented.

He attended ICC Primary School, Agugu before proceeding Lagelu Grammar School, in the same vicinity, and attending the University of Ibadan, where he got his two degrees in Archaeology/History.

He also attended the Nigerian Institute of Journalism, Ogba, Lagos, where he got his post-graduate diploma in Journalism in 1996.

He served Governor Lam Adesina as Press Secretary and after leaving government 19 years ago, he established Prokonnect Limited and has since been using the platform to publish Parrot Xtra Magazine as well as the online platform, PMParrot.com .

He is married to Oluwatoyin and blessed with wonderful children.