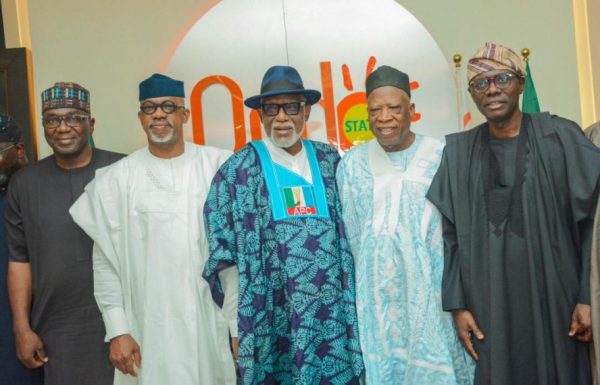 Governors in the six South-West region of the country would soon hold a security meeting on how to consolidate on the existing security system in the region.

He stated this while he paid a condolence visit to Governor Oluwarotimi Akeredolu in the Government House with his Lagos and Kwara states counterparts,  Babajide Sanwo-Olu and Mallam AbdulRahman AbdulRazaq on the attack on worshippers at St. Francis Catholic Church, Owaluwa, Owo, Ondo State.

Speaking on behalf of the visiting governors, Governor Abiodun described the attack as an attack on the entire people of the South-West region.

He said: “We have come this morning to commiserate with His Excellency and the good people of Owo and, of course, Ondo State by extension. On behalf of our families and people and governments of Ogun, Kwara and the Lagos States on the very dastardly event that happened on the 5th of June, 2022, at the Catholic church in Owo.

“Of course we have met and we have condemned this act which we find as most unfortunate. Your Excellency, this is an attack too many. We know that you have been at the vanguard of ensuring peace and security for your poeple. In fact, you are the champion of the Amotekun in the South-West.

“We your brothers wonder if this is more personal because of the role you have played in ensuring that our zone is secured. One wonders if there is a particular reason this attack was launched in your hometown of Owo. We are deeply pained, we deeply saddened and we commiserate with you.

“We pray for the lives of the departed, we pray that the almighty God forgives their sins and accept their souls. We commiserate with their families, we sympathize with those that are still in the hospitals.”

The trio donated N25 million each for the upkeep of victims of attack on St. Francis Catholic Church, Owaluwa, Owo, Ondo State by terrorists.

In his response, Governor Akeredolu declared that the current attack on the Yoruba could not continue, saying the Yoruba are peaceful people.

“Let someone point to an incident in which we left our enclave or we left this peaceful environment and went to cause problems in other places. Let them tell us.

“We have come to this country in peace, and now people want to visit us with war. You want to maim and kill us; it is not easy.

“It is a dreadful assault. I said to people that if we were at war and we were armed and faced ourselves, in one day 40 people would not die from our side. But this is not war, we were not at war.

“But I thank you for your solidarity. You have come all the time and we have always worked together, all of us.

“If you get to the scene, I’m sure it will bring tears out of your eyes. These criminals, these animals in human skin, what they did was horrendous. They did not come to kidnap, they did not come to steal, they took no dime. They went into the church and shot at everything within their sight.”

The immediate past Governor of Ogun state, Senator Ibikunle Amosun, later joined them before they travelled to Ekiti State for the grand governorship campaign of All Progressives Congress(APC).