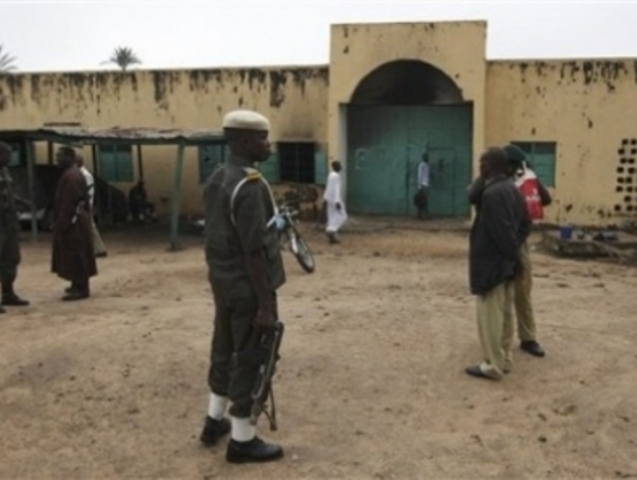 The Nigerian Prisons Service has denied that the Owerri Prisons in Imo State was raided by policemen last week.
The story was carried by one of Nigeria’s major newspapers in the aftermath of the invasion of the premises of a court in Owerri, which led to the snatching of a notorious kidnapper, Chibueze Henry Oyenkachi, popularly known as Vampire, by people believed to be his gang members.
During the said raid, not less that 264 mobile telephone sets were reported to have been seized.
But in a statement by its spokesman, Francis Enobore, the Service denied the story.
It said: “The attention of the Nigerian Prisons Service has been drawn to a publication in one of the daily Newspapers of Monday 31st January, 2017 titled ‘Police Raid Owerri Prisons, recover 264 Mobile Phones … ‘ The story is not true as no incident of such ever took place. This falsehood is clandestinely designed to malign the image of the Prisons Service.
“For the avoidance of doubt, the Controller-General of Prisons, Ja’afaru Ahmed and 3 other senior officers were in Owerri prisons on Sunday 29th January, 2017 in the wake of the attack on Prisoners and staff at Owerri High Court. The CGP in company of other heads of security agencies in Imo State including the police Commissioner, Commandant NSCDC, Comptroller of Immigration, Director SSS, Controller of Prisons and the prisons Zonal Coordinator visited the scene of the incident and at no time was any raid carried out or mobile phones recovered.
“The author of the malicious story is a mere mischief maker only out to satisfy an unknown purpose. Necessary actions have however commenced to unravel the intent of the publication.”
In a related development, Ahmed has promised to improve welfare package and medical facilities in the service.
The Prisons boss made the disclosure at Federal Medical Centre, Owerri, while commiserating with the victim of the recent attack on prisoners by yet to be identified gunmen within the premises of the Owerri High Court.
Ahmed, who had had also visited other inmates being treated in Owerri Prisons Clinic for various degrees of bullet wounds, commended the timely response of other security agencies during the attack.
He assured members of the public that the fleeing fugitives would be rearrested in no distant time.
Commending the Imo State Governor, Owelle Rochas Okorocha, for offering financial rewards for information that would aid the arrest of fugitives, he appealed to the public to provide useful information that would lead to the arrest of Oyenkachi.
The prisons boss also had audience with the Deputy Governor of Imo State, Prince Eze Madumere, at the Government House and the Chief Judge of the State, Hon. Justice Pascal Obinna Nnaji, in whose premises the unfortunate incident occurred.
The Chief Judge promised to continue to support the course of speedy trial of inmates with a view to decongesting the prison and mitigate security concerns usually associated with managing suspects in custody.
It would be recalled that on January 27, 2017 at about 10am, 58 pre-trial detainees who were taken to Owerri High Court in two Black Maria Court Duty Vehicles were attacked as the inmates disembarked from the vehicles within the premises of the court.
The gunmen, who were said to have strategically positioned themselves in the premises, opened fire and shot sporadically, hitting five inmates in the process.
The escort wardens in collaboration with other sister security agencies were able secure 49 of of the inmates and returned them to safe custody.
Oyenkachi, on whose behalf the hoodlums are suspected to have carried out the dastardly act, and seven other prisoners escaped.
Owerri prison was built in 1905 with an intake capacity of 540 inmates, but as at the time of the incident, the prison had a population of 2,260 prisoners.
Out of this number, 2044 are awaiting trial.