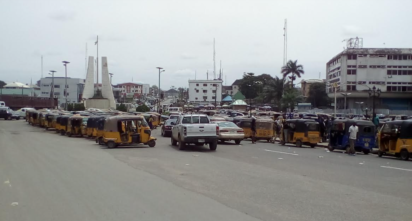 Over 500 tricycle (Keke) operators in Imo State on Thursday blocked the entrance into the Imo State Government House over the ban order placed on them by the government.
The keke operators said they were surprised that they got an information that they had been banned completely on Thursday, which was contrary to the deadline date earlier given to them.
According to some of them, Governor Rochas Okorocha gave them a deadline of December 1 and not October 12 to stop operating in the metropolis.
They said their suspicion is that some government officials wanted to use the ban order to intimidate and extort money from them.