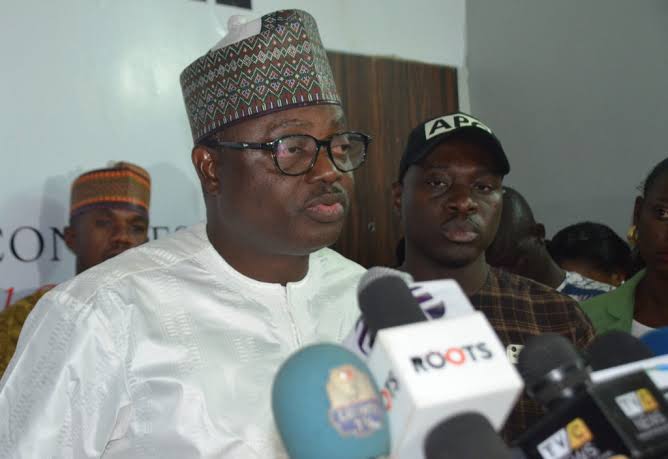 The All Progressives Congress has denounced its member, Charles Enya, seeking a third term for President Muhammadu Buhari.
Enya had gone to court to test the constitution on the possibility of a third term for the President.
But the APC in a statement by its National Publicity Secretary, Mallam Lanre Issa-Onilu, said the party does not have room for such anti-democratic forces.
It said after the clear pronouncement by President Buhari that he was not nursing such an ambition, the likes of Enya would be kicked out of the party to send clear signals to those it des bribed as being sponsored by forces outside the APC.
The statement said: “The All Progressives Congress (APC) has read in the media about a purported legal action taken by a self-proclaimed member of the Party, Charles Enya, seeking an amendment of the constitution to allow President Muhammadu Buhari run for a third term in office.
“The Party had initially chosen to ignore him. However, it has become important to send a clear message to him and such other agents provocateurs.
“At the last National Executive Committee (NEC) meeting of the Party, President Buhari didn’t mince words and he is not the type that talks tongue-in-cheek. He pointedly said he would abide by the constitution and uphold the oath of office he took, swearing by the holy book he believes in. This he said was besides his advanced age which made such an idea beyond his contemplation.
“The NEC meeting highlights released to the media by the party equally quoted the President admonishing APC members, leaders and elected officials to reposition themselves in their respective constituencies so as to sustain the administration’s landmark legacies beyond 2023 when the President’s constitutionally permitted terms end.
“The president said history would not be fair to members if the APC collapses after his second term. What better proof is required of the President’s resolve to abide by the constitution on term limit?
“The Party is, however, by this statement sending a strong signal to such other busybodies like Charles Enya who may be contemplating testing the resolve of our government on our mission to work for the best for our country to be ready to face the law.
“We would follow this new enemy of our country, who is most likely being sponsored by the desperate and misguided opposition, every step of the way, using all legal means to thwart his devilish efforts to create chaos in our country.
“As a party, we would not take kindly to anyone or group causing unnecessary distraction for this administration through anti-democratic actions. As a country, we are several years behind where we ought to be. The President Buhari-led administration is focused on the onerous responsibility of delivering good governance. We are focused on revamping our moribund infrastructure, growing the economy, fighting corruption, creating the right environment for our teeming youths to deploy their creative energies, and providing adequate security for all of our people.
“We have tried to find out the status of this character claiming to be a member of our party. If he turns out to be our member, we would ensure the party organ that has the responsibility to act on this matter promptly commence the process of expelling him. We are a progressive party and we do not have space for anti-democratic forces and charlatans.”