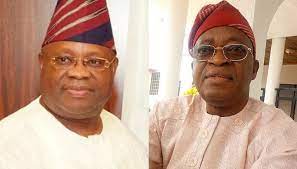 No fewer than 1,900,000 voters across the 30 local government areas of Osun State, Southwest Nigeria are expected to file out today to elect the state governor for the next four years.

Security has already been beefed up in all parts of the state with the announcement of 6am to 4pm vehicle movement restriction.

Although 15 candidates are on the ballot paper, observers are projecting the election to be a straight battle between the incumbent Governor Adegboyega Oyetola who is flying the flag of the ruling All Progressives Congress (APC), and Senator Ademola Adeleke of the first opposition Peoples Democratic Party (PDP).

The Peoples Redemption Party (PRP) unexpectedly ordered its candidate, Ayowole Adebusuyi, to withdraw. The candidate said he would do no such thing.

Markets in the state were besieged yesterday (Friday) by residents who went to buy essential items ahead of the polls.

The shopping created traffic logjams at major junctions like Oke-fia, Orita-Ayetoro and Oja-Oba areas of Osogbo, the state capital.

Heavy security presence was also conspicuous as preparations for the election heightened.

Armed military and police personnel patrolled the streets while others were deployed in strategic places.

The INEC office on Gbongan/Osogbo Road was heavily manned by security officers.

The police alone have 21,000 of their officers on ground for the exercise and the Nigeria Security and Civil Defence Corps (NSCDC) 11,226.

The Deputy Inspector-General of Police in charge of policing for the election, Johnson Kokumo, pledged yesterday that the security agencies would ensure a peaceful election.

He said cultists in particular would not be given any room to disrupt the polls.

“We’ve been able to make adequate arrangements to take care of the possible consequences of the activities of the cultists. That is affecting their arrest before the election and, of course, mopping up light weapons in circulation,” Kokumo told Channels Television.

“This is intended to create a conducive atmosphere where the gubernatorial election will take place without a crisis,” he said.

No fewer than 15 such cultists, according to him, had been arrested as of yesterday.

He also said police escorts of VIPs and top politicians had complied with an order to relinquish their arms ahead of the poll while any policeman found without his name tag close to polling units would be arrested.

However, personnel of the State Security Network otherwise known as Amotekun will not be part of the electoral duties after a Federal High Court sitting in Osogbo yesterday granted an order that they be excused from security work on the day.

The order was sequel to a suit filed by the PDP against INEC and the security outfit seeking the exclusion of Amotekun from deployment during the election.

In granting the PDP request, Justice Ayo Emmanuel said: “The 1st defendant (INEC) is hereby restrained from requesting the deployment of the second defendant (Amotekun) as part of the security personnel deployable for the purpose of Osun 2022 governorship election pending the determination of the originating summons filed in the suit.”

Reacting to the development, the Field Commander of Amotekun, Comrade Amitolu Shittu, asked the corps members to  “conduct themselves in a peaceful manner devoid of any controversy as the law has no respect for violators. “

He added: “The Area Commanders and Local Government Commanders of Amotekun in Osun State must conduct and organise the men under them very peacefully.

“You are to perform your civic right in mufti. Do not go to any polling unit with any material except your voter card. Remember to have with you all your tested and confirmed African science materials.

“All your observations and reports must be sent to #Amotekunosunsituationbase. In case any of you foresee or discover any looming crisis in your polling unit of observation, you are to relay the information to the Police officer around, the Department of State Security Service officer and other accredited professional security officers saddled with election monitoring responsibilities.”

No vehicular movement from 6am to 4pm

The Osun State Government in a statement yesterday said there would be no vehicular movement in the state between 6am and 4pm today “except those on essential electoral duties.”

Also exempted are “vehicles passing through Osun to other states.”

Secretary to the State Government, Wole Oyebamiji, asked residents not to entertain any fear about the election as adequate security is guaranteed for all law-abiding citizens.

Yakubu, in a message, appealed to them to uphold the INEC Code of Conduct, display usual sense of commitment and professionalism.

He recalled how, last month, INEC conducted and concluded the Ekiti governorship election that was widely adjudged to be free, fair, credible and inclusive.

He said: “The sheer determination, resilience and competence displayed by all of you, our members of staff, made it possible for the Commission to achieve these lofty goals.

“As you are aware, the Osun State governorship election will hold on Saturday.

“I have assured our stakeholders and the people of Osun State that the Commission will not do anything to the advantage or disadvantage of any political party or candidate.

“We have made adequate arrangements for the election. We have promised a level playing field for all. The security agencies have assured us of safety,” Yakubu said.