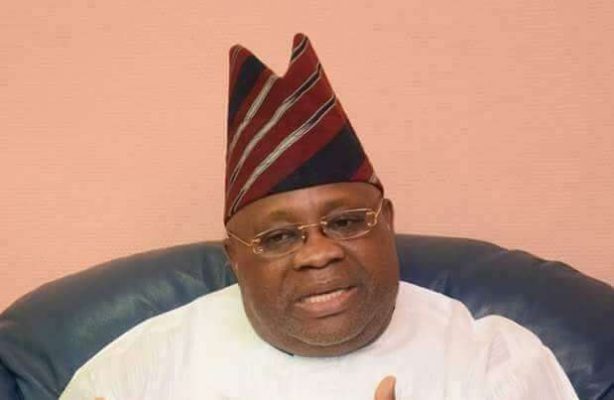 Senator Ademola Adeleke, candidate of the Peoples Democratic Party in September 2018 governorship election in Osun, has approached the Supreme Court, seeking a reversal of the decision of the Court of Appeal that declared Gboyega Oyetola, as the winner of the poll.
A statement by Niyi Owolade, Legal Director, Adeleke Campaign Organisation, on Saturday in Osogbo said Adeleke, in his appeal, wants the apex court to set aside the ruling of the appeal court and uphold the decision of the Osun election petition tribunal.
Owolade said Dr Onyeachi Ikpeazu, a Senior Advocate of Nigeria (SAN) and six other SANs as well as 17 other senior counsels, had been hired by Adeleke to challenge the appeal court judgement at the Supreme Court.
He said Ikpeazu had already filed four appeals at the Supreme Court against each of the four majority judgements of the appeal court.
The News Agency of Nigeria reports that Osun State Election Petition Tribunal on March 22 ruled that Adeleke was the rightful winner of the 2018 governorship election.
But Appeal Court on May 9, reversed the ruling and set aside the decision of the tribunal and reinstated Gboyega Oyetola as the winner of the election.
Owolade said the appeals were against majority judgement in favour of Gboyega Oyetola, the Independent National Electoral Commission and the striking out of the cross appeals of Senator Adeleke, among others.
Adeleke is seeking reliefs from the Supreme Court: to allow this appeal, set aside the decision of the appeal court and dismiss the appeal of the respondent, against the judgement of the tribunal.
Owolade said other SANs that would be appearing with Ikpeazu in the appeal, include Chief N.O.O. Oke, Dr Paul Ananaba, Emeka Etiaba, Emeka Okpoko, and Kehinde Ogunwuminju.
Other senior counsels on the team include Niyi Owolade, L.N. Iheanacho, Edmund Biriomoni, Wole Jimi-Bada and 13 others.