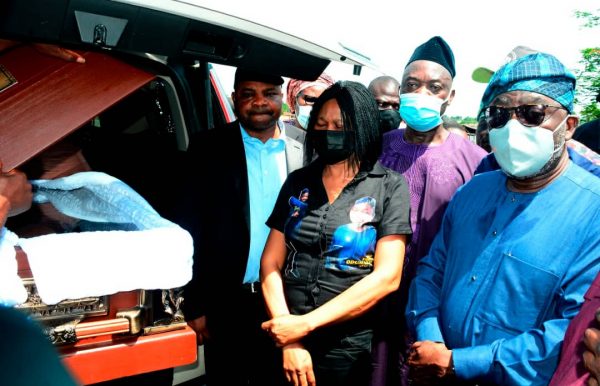 The Osun State Government on Friday officially received the body of Yinka Odumakin into the State for interment in his hometown.

This was done during a short reception ceremony at Asejire, the border town of Osun and Oyo States.

Speaking on behalf of the Osun State Government, the Chief of Staff, Dr. Charles ‘Diji Akinola, expressed condolences to the family of Odumakin, describing his demise as a painful one to the government of Osun.

Akinola said: “We are here to do the needful, to painfully receive our brother and illustrious son of the State of Osun. Mr Yinka Odumakin was one of our finest in the State. His demise is a great loss to the nation generally, but to the State of Osun in particular.

“Mr Governor has requested that we receive him into the State of Osun and accompany the body of this our illustrious son to his final resting place.

“Mr Yinka Odumakin was not just a leader of conscience but one of the finest human rights activists in this country. He was both a nationalist as he was such as refined best-in-class Yoruba nationalist as well. He represented all that is fair and just, and we will no doubt miss him.

“Mr Yinka Odumakin was also a good friend of the government. He was a counselor to us in government, he would freely offer his advice no matter how hard it is. So, Governor Adegboyega Oyetola has continued to value his counsels.

“This is very emotional, but we think it is worth us as a state receiving Mr Yinka Odumakin. This is what is accorded great leaders in this State, and Mr Odumakin is nothing less than a great leader.

“We want to on behalf of Mr Governor express our deepest condolences to the family.”

In her remark, the wife of the deceased, Joe Okei-Odumakin, commended the Osun State Government for the honour accorded her late husband, whom she described as her irreplaceable soulmate.