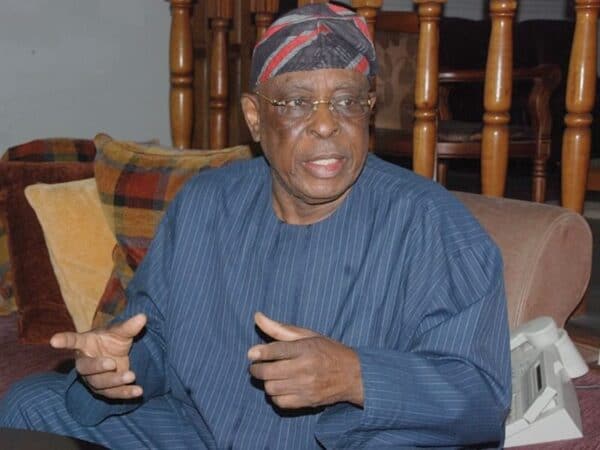 The former Ogun State Governor and Chieftain of All Progressives Congress (APC), Chief Olusegun Osoba, has thrown his weight behind direct primary as a means of selecting candidates of all political parties as contained in the newly passed electoral amendment act.

Osoba while addressing a delegation of Senators across the political parties and geo-political zones of Nigeria who visited him in London to wish him speedy recovery from a knee surgery, according to Media Adviser to Senator Solomon Adeola, Chief Kayode Odunaro, appealed to President Mohammadu Buhari to sign the newly passed electoral act into law, stressing that the President is also a product of direct primary.

“And quote me, I had cause to tell him at our National Caucus during Edo election that “Mr. President, if you can subject yourself to direct primary and at the National Convention, I do not see why anybody should be afraid of direct primary”, Osoba said

“We cannot be selective on some aspects of the Presidential system that we practice while jettisoning what is its democratic content. I am confident that the President as a product of direct primary will do the right thing. I want to commend all of you. We need to democratize. The idea of ‘we’ governors handpicking should stop. Let the people have a say. I commend the 9th National Assembly and appeal to the President in the interest of the country and democracy to sign the new electoral law”, Osoba said

In his remarks, the Chairman of the Senate Committee on Finance, Senator Solomon Olamilekan Adeola, said the members of the Senate were in London and decided to pay him a get well quick visit as his wealth of experience is needed as Nigeria forges ahead in difficult times, adding that it is gratifying to see that he is fast recovering from his surgery as evidenced in his personally coming to receive them at the door from the first floor and going back up with them to the sitting room upstairs.

Senator Kashim Shetima who spoke on behalf of other Senators stated that they came as Nigerians devoid of any political party or regional colouration to wish him well as an elder Stateman at 82 who have contributed to the nation through journalism and service in government, while some of them are still growing up, stressing that the nation still needs his wealth of experience in forging ahead in these times.

“As Senators of the Federal Republic, all of us are interested in the growth and progress of our nation. We did not come here for partisan consideration but to seek wisdom from an elder Stateman that had contributed positively to the growth and development of the nation and still willing to do more even in advanced age” he stated.