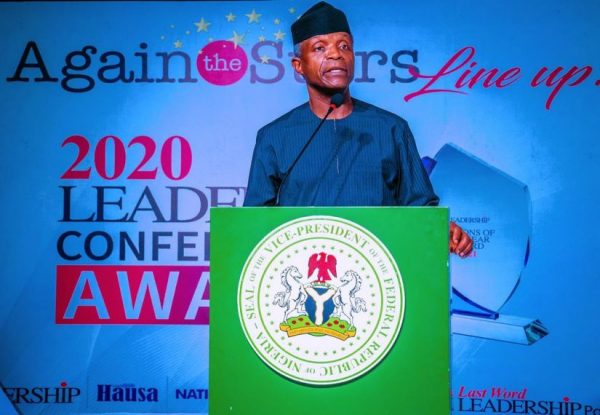 Vice President Yemi Osinbajo has urged the elite to make responsible input in fostering national unity, stability and creating opportunities for the majority of Nigerians.

Osinbajo made the call in a keynote address at the 2020 Leadership Conference and Awards in Abuja.

He commended the Board and Management of the Leadership Newspapers and their collaborators for putting together a forum for such a dialogue.

Osinbajo said that the meeting was coming against the backdrop of economic adversity, inflamed fault lines and social resentments, insurgency in the North East, kidnappings and terrorist acts in the North West and threats of secession in the Southeast and South West.

He said that in the light of all the challenges, the theme of the conference, ‘National and Regional Insecurity: The Role of Political and Non-Political Actors in Stabilisation and Consensus Building’, was clearly an inspired one.

Osinbajo said: “In considering the theme of this event, it is worth noting that often when we explore the concepts of national and regional security, there is a tendency to anchor the discourse around the machinations and intrigues of externally-generated vulnerabilities, external adversaries.

“So, we argue that the problem of state fragility in Africa is on account of the colonial origins of her nation-states, the notion that Nigeria is a hastily and arbitrarily cobbled together patchwork of mutually alienated kingdoms and as a result, has remained plagued by fundamental challenges rooted in its founding is popular, but not the whole truth.

“Indeed, it is my view that the colonial beginnings of African nation-states do not constitute the sort of immutable obstacle to nation-building that it is made out to be.

“In any case, there is a lot of scholarship and research that shows that our ethnic nations share a long history of trade, diplomacy, migration, and conflict – all of which ensured that by the time the colonialists arrived, we were not strangers to each other.”

He said that the external reasons Nigerians cited as reasons for problems could not thrive without severe internal weaknesses in the society.

According to him, the chief weakness is a human one – the elite, the political, economic, and religious elite.

“An elite that has so far proved to be socially irresponsible; one which either by selfishness, negligence or ignorance or a lack of self-awareness has so far been unable to build the institutions and more importantly, the social and political consensus upon which a just and orderly society can stand.

“And because dominance must be premised on some consensus, the elite depend on a dubious one, promotion of tribal and religious fault lines for legitimacy.

“So, where are we today?  On a nationwide and region-wide scale, we are seeing challenges to national order driven by a profound and pervasive sense of exclusion and marginalisation.

“And I do not speak of ethnic or religious marginalisation which is really another elite dog whisper to acquire more for themselves in the contest for booty.

“I speak of a division between the have-nots who have no hope and the haves who seem to have it all.

“So, the attacks we see on law and order are themselves symptomatic and they are driven by emergent critiques of the fabric of order itself.”

He said the critiques were manifesting as insurrections and insurgencies along various axes of identity.

The vice president said that the rejections of formal institutions may be driven by conceptions of religious obligations, ethnic identity and generational antipathies but that could only be superficial.

“What they have in common is that they are patterns of solidarity of those who have no stake in an orderly society because such society offers them nothing, and are fundamentally violent and implacable opposition to a system that appears to favour only a few.

“The recognition that the system is not working optimally for many of our people should inspire a broad-based movement for reform that works to recalibrate the present order and attune it more to the aspirations of our people.

“This is a risk that we cannot afford to take as a nation,” he said.

He said that when properly agreed upon, it leads to harmony, equilibrium and stability, and generates mechanisms for pacification in political crises and conflicts.

Osinbajo said that the second was mediating elite competition and conflict.

He said that in considering the role of political and non-political actors in stabilisation and consensus building,  the threat to peace and safety emanating from society itself must be addressed.

Osinbajo said that the task before the elite was that of renewing the social contract,  creating more inclusive institutions, growing the economy, and generating opportunities for the population.

“The media elite must recognise that they have a responsibility to exercise discernment in the deployment of their platforms and must reflect upon whether they are amplifying the most insensate, intemperate and incendiary voices in our midst while marginalising voices of reason.

“The political elite must accept, through policies and actions, that the purpose of power must be to better the lives of those we serve and give our young ones great hope for the future,” he said.

He said that in times of crises, people learn and relearn lessons in solidarity and in the value of pulling together.

Osinbajo said that the old rigid dichotomies between the state, the market and civil society no longer applied.

The vice president said he remained unyielding in his belief that Nigerians would prevail over current adversity by the strength of their togetherness.