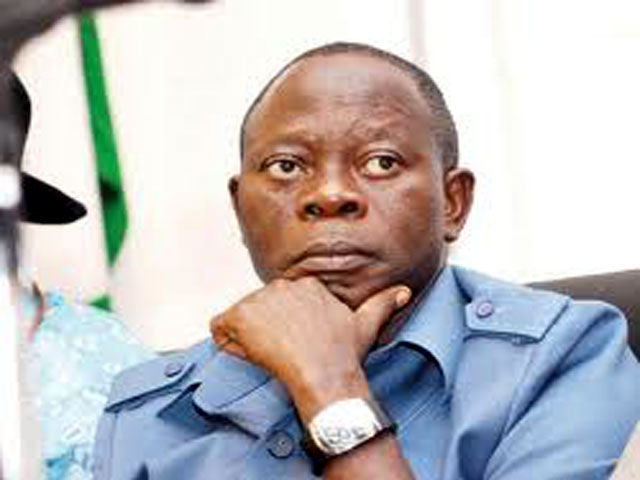 Governor Adams Oshiomhole of Edo State has renewed his call on the Federal Government to properly fund security agencies from its lion share of the federal allocation, to enable the agencies meet the security challenges facing the nation.
Oshiomhole, who made the appeal during a courtesy call by the state Commandant, Nigeria Security and Civil Defence Corps Chike Ikpeanmonwu, to him at the Government House, Benin City, said the people expect the Federal Government to equip and fund its institutions adequately.
He said: “I believe that the Federal Government should not set up institutions they cannot fund. They take 52.4 per cent from the Federation Account of all the resources declared and there are some that are not declared and we poor state governments and the FCT share twenty six percent. So you can imagine the resources accruing to Edo State is a fraction of what Abuja is collecting and to whom much is given, much is expected.
“The Federal Government is given so much from the federation account and our people expect corresponding responsibility from the Federal Government to fund and equip security agencies. If they have the monopoly of setting up security agencies, they must have the monopoly of funding them.
“I honesty believe that in the New Year, we need renewed commitment on the issue of security and proper funding by the Federal Government and they can’t shy away from the responsibility. I prefer we have a federal system that works because I’m a federalist.”
The Governor, who commended the NSCDC for its enhancement of the security in the state, said: “I appreciate the leadership for finding you worthy as Commandant and deploying you to the state to compliment the efforts of other security agencies in enhancing security in the state. I like to place on record our gratitude to your agency for those contributions you have made both as an institution to complement the efforts of the security agencies.
“I also want to commend you for some of your activities particularly the one that led to the arrest of some criminals who are still very active in the underworld economy, particularly in the damage of pipe lines and theft of crude oil. You have contributed to arresting them. I know that one of the trucks we had to dispose of in the manner that we did was as a result of the efforts of some of your men. I want to appreciate your contributions in that regard.”
Ikpeamonwu commended the state government for its assistance to the body
While enumerating the achievements of the Command in the state, the commandant requested for the inclusion of the agency in the State Task Force on the Protection of Oil Pipelines and such other task forces and committees for effective monitoring of such activities and reporting same for prompt action.