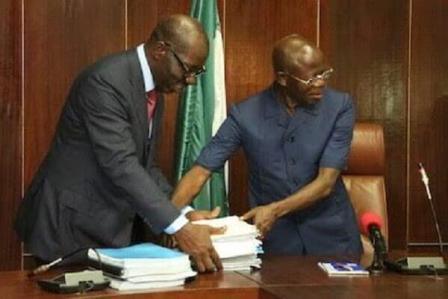 A former Governorship aspirant on the platform of the All Progressives Congress, Chief Blessing Agbomhere, has called for an end to political hostility between the former Governor of Edo, Adams Oshiomhole and his successor, Godwin Obaseki.
Agbomere, who made the call a statement in Benin on Thursday, said that violent approach to divergent ideologies had never promoted true democracy in any society.
Agbomhere, who recently defected to the Peoples Democratic Party, urged all lovers of democracy to rise and condemn the recent siege on Oshiomhole’s residence by suspected thugs.
The News Agency of Nigeria reports that the state has been embroiled in political crisis ahead of next year’s governorship election in the state.
Agbomhere noted that mobilising and sponsoring thugs to Oshiomhole’s house was an infringement on his fundamental rights to private and family life as well as a trespass to his property.
He stated that it was obvious that the sponsored thugs attempted to humiliate and intimidate Oshiomhole, when they swooped on his Benin residence at Okorotun Street, GRA, Benin.
According to him, the siege amounts to violation and breach of Oshiomhole’s right to dignity of human person, personal liberty and freedom of movement as guaranteed in Sections 34, 35, 37 and 41 of the 1999 Constitution of the Federal Republic of Nigeria (as amended).
He said: “Practicing democracy should not just be expressed in the speech of politicians; it must flow from their actions. Divergent interests and opinions are vitiating elements of political developments and the sweeteners of democracy.
“Political violence is like a mad dog on the loose which can bite the king and its cheerleaders, when the society refuses to muzzle it in time.
“We all have the constitutional duty to prevent the commission of any crime, regardless who perpetrates it and for what reason.
“I condemn this attack in its entirety and urge Inspector-General of Police, Commissioner of Police and Edo Government to step up efforts in the protection of lives and property in the state.”

I am not a spare tyre, I have roles in governance – Bauchi Deputy Governor