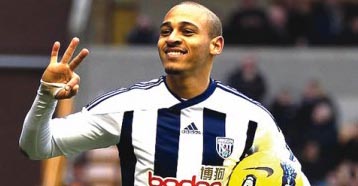 West Brom Albion striker, Peter Osaze Odemwingie, will return for pre-season on Monday with his future still not decided.
The want-away forward will report for the first day of the Baggies’ training along with new boy, Nicolas Anelka, and defender, Gabriel Tamas, who has returned from Romania.
Both the 32-year-old and boss, Steve Clarke, are keen for a parting of the ways but representatives of the forward are still awaiting a decision from Albion on the asking price for any transfer.
And Tamas is expected back after his ban on leaving Romania was lifted by a court, although an investigation over an incident in a Bucharest apartment block in June is ongoing.
Meanwhile, former Albion striker, Marc-Antoine Fortune, has signed a two-year deal with Wigan Athletic