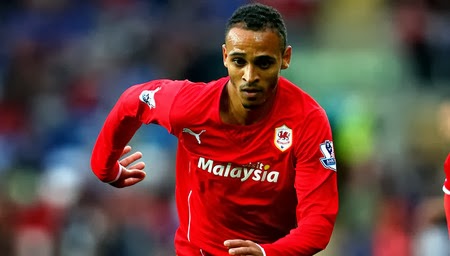 Nigerian international, Osaze Odemwingie, banged in first goal ever for Stoke City in their two-all draw against Southampton at St. Mary’s Stadium on Saturday.
Saints took the lead in the fifth minute as Rickie Lambert curled in an absolute peach of a free kick to make it 1-0, but then a flurry of goals just before half time saw the game burst into life.
First up, Odemwingie slotted home coolly in the 38th minute and it was 2-2 before half time, with Southampton’s Steven Davies and Stoke’s Peter Crouch grabbing the goals for both sides.
In the second half, the blustery conditions really came into play, as both teams struggled to get the ball down and spray it around.
Southampton missed two good chances midway through the second period as Jay Rodriguez headed wide and Jack Cork skewed his shot off target, while Stoke looked to pounce on the break.
After an unforgettable second half, the final whistle went as the points were shared at St. Mary’s.