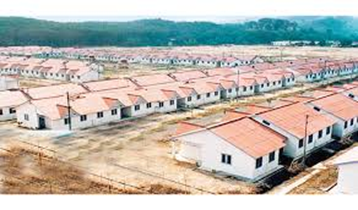 Real estate operators on Friday called for complete overhaul of the National Housings Fund and the mortgage system to impact positively on the nation’s housing development.
In separate interviews with the News Agency of Nigeria in Lagos the operators in the real estate industry, described the recent review of NHF as a good development and in right direction.
NAN reports that under the new conditions of the Federal Mortgage Bank of Nigeria, Nigerians above 18 with a steady paycheck will now be able to access up to N5 million housing loan without equity contribution.
This was stated as one of the new conditions for accessing mortgage funds from the bank.
Initially, beneficiaries must contribute 10 per cent to access up to N5 million, 20 per cent on N10 million and 30 per cent to access N15 million.
With the new conditions, an equity contribution of 10 per cent would not be needed for funds between N5 and N15 million.
An estate operator, Adelaja Adekunbi, advised prospective beneficiary to the fund to join cooperative societies and social groups to effectively access the fund.
Adekunbi, also Chairman, Nigerian Institute of Building, Lagos Chapter, suggested that the intending beneficiaries should pool resources together through the cooperative societies to access the fund.
The chairman said that with the conditions of the NHF, it is not advisable for individual to go for it.
According to him, the government needs to do more to further breakdown the requirements and remove other bottlenecks hindering easy access to the fund to make it more accessible to average and low-income earners.
He said: “With the present conditions, not many of the targeted Nigerian workers can still access the fund because I believe there are still other hidden charges and the Primary Mortgage Banks also have their conditions too.”
He said the entire NHF and the mortgage system needed to be completely overhauled before it could have positive impact on the nation’s housing development.
The operator said the Nigerian government had not got it right, saying that until the mortgage system was structured to meet the international standard to assist Nigerians to build and own houses using the platform.
The chairman pointed out that it was through the mortgage market that other countries developed and sustained their housing sector.
According to him, in United States of America, the mortgage system is structured in a way that low-income earners like the cleaners and drivers can own houses.
He said: “Unfortunately, in Nigeria the current situation in the country’s mortgage system does not make it feasible for the average Nigerian to afford a decent accommodation.”
Chudi Ubosi, African president, International Real Estate Federation, said though the new conditions would propelled business activities in the industry and enhance housing delivery as more people would have access to quality houses.
Ubosi said it was a huge win for the Nigerian workers, the Nigerian economy and particularly those that contribute to the NHF.
According to him, the challenge of government policy is poor implementation, saying lots of polices enacted in the country in the past have not been implemented.
He said: “The new conditions if well implemented will go a long way toward reducing the financial burden of home ownership that contributors to the fund have been carrying for the past three decades.
“More housing projects will crop up to boost activities in the real estate industry to the benefit of greater percentage of the populace because when construction activities are ongoing, lots of people will be gainfully engaged.”