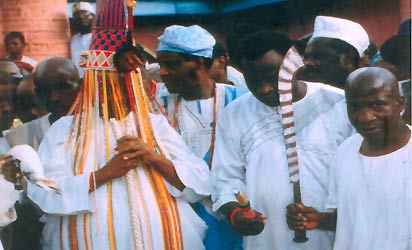 The new Ooni of Ife, Oba Adeyeye Ogunwusi, Ojaja II, on Friday joined Muslim faithful in Jumat prayer and had Ismail (sacrifice of Allah) added to his name.
The Chief Imam for Ife Central Mosque, Alhaji Sheihk Opeloye, represented by his deputy, Alhaji AbdulSemiu AbdulHammed, urged Ogunwusi to imbibe the culture of perseverance in order to succeed in his assignment.
Opeloye said the first Chief Imam christened late Oba Adesoji Aderemi as Sulaiman and late Oba Okunade Sijuwade was Mohammed Saliu.
He said the four pillars of success are parental upbringing, societal influence, environmental impact and hard work, adding that Ooni has achieved them all.
The Muslim cleric lauded the monarch’s good gesture even before being installed by rehabilitating roads, providing transformers and pledging to provide jobs for the teeming youths.
Opeloye also commended the Ooni’s wife, Olori Adebisi Ogunwusi, for her humility.
In his remarks, Ogunwusi, thanked the people of Ife and all Nigerians for their support, saying that he would continue to worship with the Muslim faithful as a child of a Muslim mother.
Ogunwusi promised to keep the standard of working with the elders in order to move Ife and the Yoruba race to greater heights.
Yoruba elders, led by Sir Ajayi Olanihun, visited the Ooni in his palace after Jumat where they pledged their support and continued counselling as head of Yoruba race.
NAN.