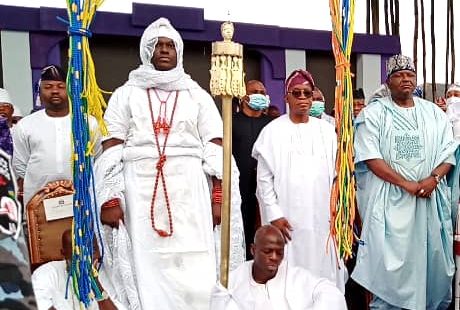 The Ooni of Ife, Oba Adeyeye Ogunwusi, Ojaja 11, on Saturday celebrated this year’s Olojo Festival amidst pomp and pageantry.

Oba Ogunwusi emerged from his seven days seclusion in an all-white apparel to receive people from home and Diaspora who paid homage on him.

Cultural dancers and worshippers from neighbouring towns also sang and danced to make the event colourful.

The Ooni, decked with Aare crown, amidst prayers and several gunshots, began the journey to Oke-Mogun and Idi-Aje, where rituals and prayers were said for the peace of Nigeria and the Yoruba race.

Olojo festival, which holds annually, is a major cultural celebration in Ile-Ife to mark creation of the universe and “Aare Crown,” a special crown weighing 100kg and made of 151 items, worn by Ooni only during the festival.

Thousands of people of Yoruba race from various communities in Nigeria and Diaspora stormed Ile-Ife to celebrate the festival.

The Awise of Ife, who came from Jamaica for the festival, Amlak Atah, stressed the need for Nigerians to preserve their culture and traditional heritage.

Atah encouraged Yorubas to stand by tradition because it was the only thing that could lead indigenes to great achievements in life.

He urged the Yoruba race to gear up to the challenges facing their heritage and try all possible means to protect their cultural beliefs and values from extinction.

He admonished all and sundry to jointly embrace the tradition of their forebears, repackage and export it.

In the same vein, Vice-President for Yeyemolu the Lion Society, Alhaja Ramat Ologundudu, said Olojo Festival signified the day the world was created.

Ologundudu applauded the Ooni for promoting the culture and appealed to Nigerians, especially people from Ile-Ife, to support Oba Ogunwusi to take Yoruba race to higher ground.

She admonished all and sundry to cooperate with their traditional ruler to promote and preserve the culture of the Yoruba race.

NAN reports that on Ooni’s procession to Oke-Mogun were Ife chiefs, priests, members of Oodua People’s Congress, indigenes as well as tourists from different parts of the world.