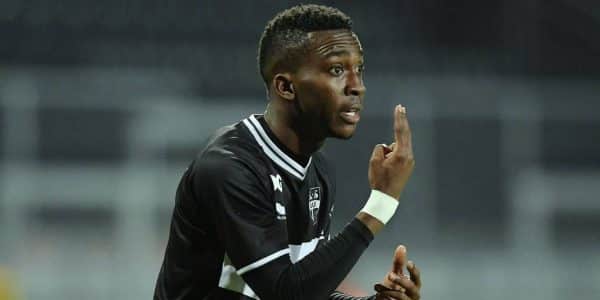 Everton striker Henry Onyekuru has returned to Belgium to resume his loan spell with Anderlecht as he bids to finish the season on a high.
The 20-year-old, an £8 million capture last summer from Jupiler League side KAS Eupen, suffered a knee injury last December that looked at one stage as though it could end his season.
Having avoided the need for surgery, Onyekuru has endured weeks of patient rehabilitation and was deemed fit enough to rejoin Anderlecht’s squad this week.
“I want to say thank you to everyone that made my recovery possible,” the striker said on Instagram. “The medical team, staff and doctors at Everton for their rehab and facilities.
“I also want to thank RSC Anderlecht and the amazing supporters for their support and their faith in me during this journey.”
The intent behind the decision to loan Onyekuru straight out to Belgium was to allow him to continue progressing in a familiar league and gain enough notice to be selected routinely by Nigeria so as to earn enough international caps to qualify for a work permit in England.
He scored 10 times in 28 appearances for Anderlecht before his injury and he will be hoping the pick back up where he left off and be chosen by his country for this summer’s World Cup.