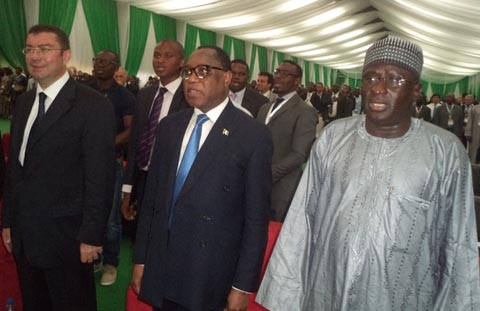 Dr. Olusegun Aganga, the Minister of Industry, Trade and Investment, on Thursday said $200 million (N32 billion) had been invested in Onne Oil and Gas Free Trade Zones.
Aganga, who stated this at an oil and gas trade and investment forum in Onne, Port-Harcourt, Rivers State, said that the above investment figure was for the last 10 months.
He said that if the figure was added to the $4 billion capital investment reported in 2012, the latest figure would amount to $4.2 billion (N672 billion).
The forum was organised by Orlean Invest West Africa Limited in partnership with the Federal Government.
The theme of the forum was: “Investment opportunities in the upstream and downstream sectors of the oil and gas industry”.
Aganga described the total investment portfolio as a remarkable progress when considered from the standpoint of weak global economy and the huge competition among advanced economies.
He said that the success of the policy on FTZ had increased the demand at the sub-national level of government for a replication of free zones in other parts of the country.
Aganga said: “The Onne Oil and Gas Zone remains a pacesetter, with additional investment of $200 million in 2013, in addition to the $4 billion capital investments reported in 2012.
“This is indeed a remarkable progress when considered in the light of a weak global economy and the cut-throat competition, even among emerging and advanced economies for inflow foreign direct investment.
“The success of our FTZ policy has invariably increased the demand at the sub-national level of government for replication of free zones in other parts of the country.
“Also an avalanche of applications for setting up business enterprises in the various FTZs keep pouring in from prospective investors.”
The minister said that the genuineness and sincerity of purpose of government to enthrone the private sector as the main driver of growth and development of the nation’s economy was not in doubt.
He said that the theme of the forum, which was the second edition, would not only consolidate the gains achieved in the first edition but would also help to deepen investments in the sector.
Aganga added: “To all intent, the oil and gas industry remains the prime mover of Nigeria’s economy.
“The oil and gas free zone concept continues to be strategic in the facilitation of private sector investments in the sector in line with the nation’s industrial policy.”
Given the role of the private sector in driving the national economy toward sustainable development, the minister urged investors to explore the available incentive packages offered by the free trade zones.
He said that the Onne oil and Gas FTZs would continue to be a catalyst for diversification of the economy into services and downstream sector.
The minister said that Nigeria’s oil and gas zone was the single largest and fastest growing oil and gas free zone in the world.
“Indeed, our national aspiration is to be the petrochemical hub in Africa,” he said.
The Minister of Petroleum Resources, Diezani Alison-Madueke, said that the sector offered a global scale of opportunities for both local and foreign investors.
Alison-Madueke said that the Federal Government would continue to provide enabling environment for investments to thrive.