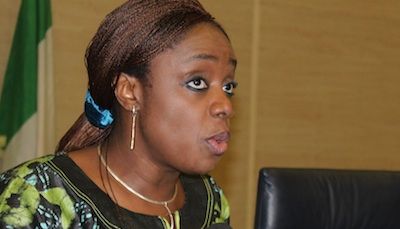 Share
Facebook Twitter LinkedIn Pinterest Email
The Minister of Finance, Kemi Adeosun, on Monday said only three million out of 180 million Nigerians possessed insurance policies to protect themselves from uncertainties.
Adeosun, who made the disclosure at the ongoing 2017 National Insurance Conference in Abuja, noted that insurance was playing critical roles in the economy.
The theme of the three-day conference is: “Nigeria Open for Business.”
Represented by Alhaji Mammud Dutse, Permanent Secretary in the Ministry of Finance, Adeosun said that insurance was facilitating investments by reducing the amount of capital and savings needed by individuals, corporations and agencies to fight unforeseen losses.
She said that total insurance premiums grew from N75 billion in 2005 to over N300 billion in 2016 and contributed approximately 0.7 per cent to the Gross Domestic Product.
She said that the figure was less than the African average of 3.3 per cent and the global average of seven per cent.
The News Agency of Nigeria reports the 2017 event would be the third since the conception of the Insurance Industry Consultative Council in 2015.
IICC is an amalgamation of all the constituent arms of the insurance industry, which includes the Nigerian Insurers Association, Nigerian Council of Registered Insurance Brokers and Institute of Loss Adjusters of Nigeria.
The minister lamented that the insurance industry was facing the challenge of low-level penetration.
Adeosun said: “This means insurance from writing more premiums from millions of Nigerians can provide finance for our long-term economic growth for the country’s recovery.”
She said that practitioners must be willing to do more to make insurance a giant industry to look up to, adding that distribution channels must be innovative and that new products should be developed to attract the populace.
She argued that to achieve conclusive growth, insurance must be deployed to rural areas.
She said: “Deepening insurance penetration to the rural areas must include, improving technical capacity to meet the emerging market trends.
“The best way to promote insurance is to incorporate both individuals and corporate entities into the insurance market.”
The minister said that the Federal Government would ensure that its economic reforms supported the growth of the insurance industry, adding that many foreign investors had indicated interest to invest in the sector.
She said: “There is also a high level of ownership of insurable assets in Nigeria, despite the economic situation.
“We expect that industry reforms will continue to drive investments and new market entries.
“Foreign investors have shown great interest in the Nigerian insurance sector by entering into the market and progress can be seen in the introduction of new insurance products in the growing mortgage and housing sector.
“To concentrate on the progress being made so far, Federal Government will always play its part to ensure that government assets are properly insured.”
Also speaking, the Minister of Trade and Investment, Dr Okechukwu Enelamah, said the best way to move the industry forward was for the practitioners to accept responsibilities.
Enelamah said: “The practitioners need to work hard to ensure that many Nigerians are dragged into insurance net.
“The practitioners cannot compare themselves to entertainers.”
Earlier, Alhaji Mohammed Kari, the Commissioner for Insurance, National Insurance Commission, commended the Federal Government for its support for the industry.
Kari described insurance as promoter and stabiliser of economic and commercial activities.
He said the commission had commenced the review of processes which included timelines and deadlines.
Kari said that the growth of the industry was hindered by unripe products, religious beliefs and wrong perception.
NAN reports that over 400 participants are taking part in the NIC conference.
Federal Government Insurance policies Kemi Adeosun
Share. Facebook Twitter Pinterest LinkedIn Tumblr Email