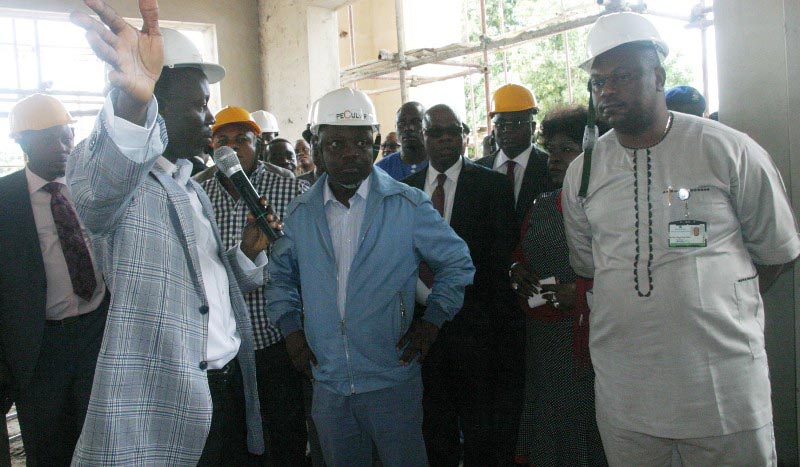 The Delta State Governor, Dr. Emmanuel Uduaghan, has enjoined Deltans to be patient with his administration, explaining that construction work on ongoing road projects in the state would continue in earnest after the rainy season.
Dr. Uduaghan, who made the call on Tuesday while inspecting some ongoing roads and schools projects in Asaba, said no meaningful road construction work can be done during the rainy season.
He however promised that work would commence immediately after the rains and all ongoing projects would be completed during the forthcoming dry season.
In particular, he assured the residents of Direct Labour Agency Road, Asaba, that the road would be completed hopefully by December this year.
His words: “No road construction work can take place during the rains.
“I promise you that work will continue on all ongoing roads in the state after the rains and I can assure you that by December this year, this Direct Labour Agency Road, Asaba will be completed.
“We have tried.
“The walk ways and drainage on the road have been completed.”
Speaking further Dr. Uduaghan stated: “The state government will be connecting the Direct Labour Agency Road to the Asaba-Onitsha Expressway to help decongest traffic on the Expressway.”
H explained that most of the adjoining link roads along Direct Labour Agency Road were being tarred to achieve this goal.
In an interaction with residents of the area, Mercy Chigbo thanked Governor Uduaghan for the good work of his administration but pleaded that the road be completed on time to stop flooding in the area and boost economic activities.
Governor Uduaghan also inspected construction work at the New Central Hospital along Debe Crescent and expressed dissatisfaction with the slow pace of work at the site.
According to him: “Work on this project is too slow.
“The project is still at the same level of completion as at the last time l visited this site.
“You people have to increase the pace of work on this project to ensure its completion on schedule.”
Responding, the Site Engineer, Architect Ayo Orugbemi of Deux Construction Company, assured the governor that the project will be completed in the next four months.
Orugbemi said: “The little challenges we have been experiencing are as a result of the re-construction of some of the buildings as we were not the original contractors that started the work.”
At the State House of Assembly Complex, Governor Uduaghan expressed satisfaction at the quality and pace of work at the construction work going on there.
He commended the Speaker, Hon. Victor Ochei, for the initiative and the new look the complex was wearing, especially the legislative chambers, adding that a conducive working environment would enable the workers to be productive.
Ochei said the transformation of the legislative complex was in line with the state governor’s infrastructural development agenda.
He said: “The transformation in this complex is in line with the state governor’s infrastructure agenda.
“The legislative arm of government is the least developed, that is why we are doing all this construction work here to create a conducive working environment for the staff.”
In a related development, Governor Uduaghan also visited Osa-Dennis High School in Asaba to assess the pace of work on the classroom construction and directed the Principal of the school to ensure that the school compound was always kept clean and the over grown weeds cleared.
The governor charged principals and heads of public educational institutions in the state to keep their environments clean or face sanctions.
He said that it would be wrong for principals, head masters and other heads of government institutions to pay for the cleaning of the school environment.
According to him: “Every principal and head master must keep the school environment neat.
“It is something that must be done and any principal or head master who fails to keep the school environment clean would be appropriately sanctioned.”
He explained that government had to reconstruct 62 more classroom blocks in the school to enable the school accommodate students from other schools returned to their previous owners.
His words: “Government had to increase the number of classroom in this school because it is one of the public schools where students from those school returned to missions will be sent to.”